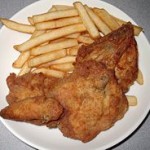 NOTE about photo: I don’t recommend commercially produced french fries, as they are coated with wheat flour and then fried in oils not intended for high-heat cooking. But if you start with whole potatoes, cut them into fries, and then fry them in the same type of fat as the chicken, or bake them in your oven, that would be far more healthful.

Today, most people use cooking oil or shortening to fry chicken, but these are not healthful fats, especially when heated to frying temperatures. Some people buy commercial lard at the grocer, but it has been hydrogenated so may contain trans-fats. My choice of fat for frying is home-rendered lard, using pork fat from a local hog farm (Farm to Market Pork). Or, if I’m out of lard, I use a combo of avocado oil and coconut oil. See Notes on Ingredients: Fat for Frying, below, for more.

When I was a kid, my Dad used to make fried chicken in his cast iron pan, using bacon and other pork fat he’d saved; or, if there wasn’t enough used fat, he bought rendered lard from a local farmer. And it goes without saying that the chicken also came from a local farmer who raised chickens for sale, a tradition common in the 1950s when I was growing up; indeed, these things were hard to find in a grocery store. Dad bought capons (castrated roosters) and stewing hens (old layers).

I buy whole chickens from a local Hutterite colony, or in a pinch, Draper Valley whole chicken; then I cut it up, brine the breasts, save the bony pieces (backs, neck) and giblets for making broth, and fry the meaty pieces. Since I’m just one person, I usually freeze the meaty pieces from half the chicken for future use. However, if a whole chicken is not available and I’ve used up all my frozen half-chickens, I will use a package of  Draper Valley or Ranger thighs.

If you use chicken breast, I highly recommend brining them. Brine them whole, then cut each breast in half , and each half-breast in half again, crosswise, as the smaller pieces will cook more evenly.  They may also cook faster than dark meat, so check carefully while cooking. I use a wet brine, but dry brine’s can also be used; see Fine Cooking: Southern Fried Chicken (6) for a great Dry-Brine Recipe

See also Fine Cooking: 4 Secrets to Amazing Fried Chicken (5) for more on brining and other tips.

It goes without saying that you want to use a good quality buttermilk, even though you will be treating it to the high heat of frying.  But because of the heat, you don’t need to use buttermilk made from raw milk. Plain, unsweetened yogurt can also be used.

Among other reasons to use buttermilk, is that it helps your flour or crumb coating to adhere to the meat, for a crunchy coating. See also Fine Cooking: 4 Secrets to Amazing Fried Chicken (5) for more on the crunchy coating and other tips .

Most recipes call for salad oil, peanut oil, or Crisco.  But I prefer to make my fried chicken like Grandma made it: with goose/duck fat or lard (not bacon fat).  I think it gives the best flavor and the best even brownness.  And besides, liquid vegetable oils are not meant for such high heat, and Crisco contains trans fat. If I’m out of lard, I use a combination of avocado oil and coconut oil, both of which can handle the high heat. NOTE: I used to use a combo of palm oil and coconut oil, but it is very hard to find sustainably raised palm oil, so I’ve given up on that. Avocado oil is more sustainable and can also tolerate higher heat.

Or try using a combo of ½ cup each lard, avocado oil and coconut oil. See below for more on these fats.

Frying in batches to avoid overcrowding and a drop in oil temperature is also important. See also Fine Cooking: 4 Secrets to Amazing Fried Chicken (5) for more tips on frying and cooling on a rack to retain the crunch.

In my opinion, this is the best fat for frying chicken. These water-loving birds have a LOT of fat that needs to be rendered before cooking the bird. Once rendered and cooled, it will keep forever if stored in a cool place.

Lard comes from pigs, and is high in mono-unsaturated fats (as are found in olive oil), has some saturated fat, but has less of the fragile polyunsaturated fats found in vegetable oils.  This composition is a good thing for high temperature cooking, because it can tolerate the high heat without oxidizing the unsaturated fat (which would make it rancid and unfit for consumption).

Most commercial lard these days contains hydrogenated lard, which is not a good thing, because it is another name for trans fat.  So it is best to render your own lard from pork fat, or ask your butcher if he sells fresh rendered lard.

Avocado oil comes from avocado fruit. It has only recently been available here in rural Montana, so I’m fairly new to using it. It can tolerate high heat even better than coconut oil. It is very high in oleic acid, a mono-unsaturated Omega-9 fatty acid.

Palm oil is another good choice of mostly-saturated fat, but look for sustainably farmed palm oil, as most commercial palm oil is responsible for massive tropical deforestation, a major contributor to climate change.

This is a mostly saturated vegetable fat from palms, and is used extensively in Asia for high temperature cooking and frying.  If you cannot find lard without hydrogenated lard, then try using palm oil.

Coconut oil is another mostly-saturated fat, and is great to use if you like the flavor of coconut with your chicken.

I prefer to use my Corning Ware Electric Chicken Fryer (photo, below) from bluecornflower.com (4)) because it has a light that indicates when it has reached the selected temperature. My cast iron fry pan would be my second choice.  Unless you have a professional range with larger burners, do not exceed a 12″ fryer, as it will be too wide for your burner and will not heat evenly. 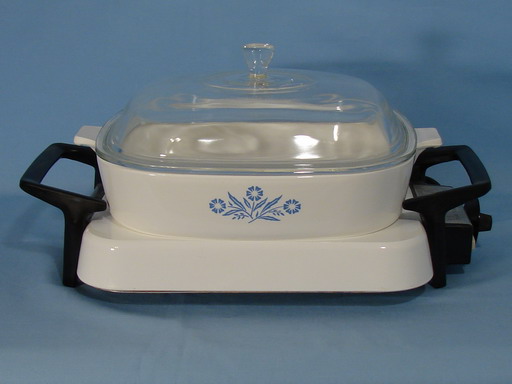 This recipe is adapted from Cooks Illustrated Magazine, and serves 3 (or 2 with leftovers).  I call it “1-2-3″ because of the cooking method which is done in 3 steps; the first two covered (skin side down), and the last uncovered (after turning the pieces).

The amount of fat cited in the recipe is just right for my Corningware fryer (see above); you may need more or less fat for your fryer/fry pan. Just make sure it is at least 1/2” thick when fully melted.

7/6/10 Testing wheat-free version: I’m trying to be wheat free, to see if it makes a difference in my health, so instead of unbleached white flour (wheat), I used half oatmeal flour and half unbleached white spelt flour. Used three large thighs (1.4 pounds), and half palm oil, half lard for the fry. Otherwise, followed instructions as written. Result: What can I say; Mmmmm. I think this is even better than when I’ve used wheat flour! NOTE (1/25/14): I’ve learned I have food sensitivity to oat, and even spelt can be problematic if I use it frequently, so I’m back to using half Organic unbleached white and half Organic whole wheat pastry flour.

8/19/18 Testing after a long hiatus: I’m back to eating wheat but will likely change to Kamut. I’ve been craving real fried chicken for a couple weeks, so decided to make up a batch. I brined and then soaked 6 thighs in the buttermilk, and trimmed off extra skin that was hanging free from each thigh. Used Organic unbleached white flour and seasoned with pepper and a bit of paprika. Used lard and coconut oil for the fats.  Cooked as written (1 -2- 3). Could only fit 4 in my fryer because these thighs are so large; thus had to do in 2 batches. The fat was pretty ‘dirty’ from the first batch – bits of buttermilk-flour coating that broke off and got quite browned – but the second batch still turned out. Absolutely delicious, but a lot of fuss and bother for such a simple recipe!