My Mom used to make angel food cakes – made with the egg whites only and lots of sugar. She learned the aerating method when she learned the recipe for her classic Tom & Jerry batter at Christmastime. I loved those cakes, with an egg-white and whipped cream frosting, and admired her patience whipping those eggs.

In the 1970s, I received a gift of Paula Peck’s The Art of Fine Baking (3) and devoured its text, cover to cover. Among the things I loved to make was genoise, a rich egg-leavened sponge cake, and also pound cake. Both of these require aerating the eggs and sugar, using the technique I learned from that book and detail below.

I am now avoiding dietary sugar, and generally use stevia instead of sugar to sweeten my treats. But some cakes require the structure of sugar to support the eggs; in this case, only a small portion of the sugar can be replaced with stevia. Another option is a trick learned from Bob’s Red Mill (4) to reduce (but not eliminate) the sugar in the recipe. This is also described below.

Aerating eggs & sugar for a batter

Egg-leavened cakes (and also dessert soufflés) depend upon properly beaten eggs and sugar for lift, rather than baking soda/powder or yeast. There are two different methods for beating the eggs and sugar to aerate the batter properly. 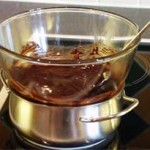 Both methods require a bain marie – a device that provides steamy heat to warm the eggs so they will take up more air for greater whipped volume. Traditionally, this device consists of a saucepan and a mixing bowl (Photo, left, from WheatFree.org (1)): The saucepan holds the steaming water, and the mixing bowl rests on the rim of the saucepan so that the bowl’s bottom does not touch the water.

The modern-day version is a double boiler (see photo at top of page), which works fine for the first method if it is large enough, and if the bottom of the top part is rounded (for whipping). For the second method, you need two of the round-bottom top parts or mixing bowls.

I generally avoid sugar and have come to depend on stevia for sweetness in my recipes. Because egg-leavened cakes depend on the chemistry of sugar working with the eggs for proper texture, I don’t recommend using stevia for more than ¼ of the sweet. For example, for each 1 cup sugar, substitute with ¾ cup sugar and ⅛  tsp stevia extract powder. Whip the sugar with the whites; sift the stevia with the flour or dissolve it in any of the watery liquids in the recipe (like vanilla extract, lemon or orange juice, etc.), but milk or cream don’t work because the stevia won’t dissolve in milk-fat.

Another option – my preference – is to use sweet diary whey in a ratio of 1 part whey to 2 parts sugar; that is: for 1 cup sugar. use a mixture of ⅔ cup sugar and ⅓ cup sweet dairy whey). Sweet dairy whey is a byproduct of cheese making; it is initially a cloudy liquid, but is then dehydrated (at low temperatures) to a powder. It is available from Bob’s Red Mill (3), and adds a bit of protein to your cake.

The ‘sweet’ in the whey is lactose, a disaccharide of glucose and galactose that is not (generally) broken down into its simple sugars, but rather converted to lactic acid by the good bugs in our gut. Because of this, it is lower in calories and has a lower glycemic index than table sugar. 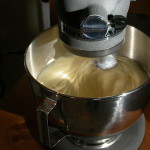 This method is for using a hand-held electric mixer or stand mixer. (Photo, right, from Wikimedia Commons) 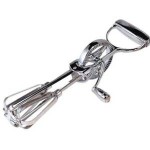