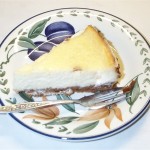 I’m very particular about cheesecake.  I don’t like the creamy, pudding-like kind at all, and will turn it down when offered.  However, I do rather like the cakey kind, but can eat only a small serving, preferably with a berry topping and rich whipped raw cream as in this recipe.

I imagine this recipe has a pudding-like texture, since it is held together by gelatin; but the raw aspect appeals to me, so I’d like to give it a try one of these days.

This recipe is adapted from Nourishing Traditions, by Sally Fallon with Mary G. Enig (1).  When heating the yolk/milk mixture to dissolve the gelatin,take care not to heat it too much.  If above 110°F, the proteins will begin to denature and the enzymes will be deactivated.