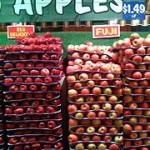 I gave most of my Macintosh apples away but saved enough to make a pie or crisp. I want to avoid high-carb ingredients, such as grains, pseudo-grains, and sugar; I’ve used almond meal in pie crusts so thought that would be a good place to start, especially since apples and almond go well together.

History note: 10/27/21: Something happened during the night, as this page was not the original text but rather a copy of the Apple Crisp with Almond Meal and Pecan Topping (Gluten-Free) recipe. So I re-wrote the text with option for using all almond meal with pecans, or a mix of sprouted grain pastry flour and almond meal flour with pecans, and my testing notes for the updated 10/26/21 (5×7 pan) and 11/2/21 (6×8 pan) bakes. Also the Fruity Desserts Menu link had an error, so I restored the correct link.

What apples work best in a crisp?

Any apple good for a pie is good for a crisp. Check out my post: Apples (About), for a handy chart on which apples are best for Snacks, Salads, Pies, Sauces, Baking or Freezing; and Storage Months for 19 different varieties. From the chart, the only apple that is NOT good for pies is Red Delicious. However, to that I would add “Golden Delicious, at least not good for a crisp; I used them in my Jan 27, 2020 testing, and they just turned into apple sauce. All others are ‘excellent’ or ‘good.’

The ”excellent’ apples for crisps (in alphabetical order): Cameo, Cortland, Granny Smith, Honey Crisp, Idared, Jonathan, Macintosh, Newtown Pippin, Pink Lady, and Rome Beauty. I have Macintosh and Honeycrisp trees, so I mainly use Macintosh for my crisps, but sometimes I do half of each. If I use up my own apples, I use Pink Lady from my grocery store. [Note that I’ve deleted Golden Delicious from the “crisps” list, but I’ve left it in the chart for “pies.”]

The original recipe is adapted from the following recipes:

and makes enough to fill a 9″ square glass baking pan. Or you can do a smaller recipe for an 8″ glass pie pan (or my 7½” ceramic pie pan), or a 6″x8″ rectangular pyrex pan; ingredients included for these as well. Note that pears or a mix of apples and pears could be used instead of all apples.

Both sizes have been updated to use more apples, as the original amounts shrank considerably after baking. If using small – medium size apples, use the lower amount; if large apples (3″ or more in diameter), use the higher amount.

Next time, test 6×8 pan next time using 4 or 5 apples – enough to fill pan when raw, because they shrink quite a bit upon baking.

Top with berries, if desired; and serve with one of the following:

‘* preferably raw cream or simply pasteurized; I do not recommend ultra-pasteurized cream, especially if you want it whipped, because it doesn’t whip well and is not healthful.

11/27/14 (Thanksgiving): Half recipe: Used 2 of my Macintosh apples, which just filled my 7½” ceramic pie pan, so I basically halved the rest of the recipe: juice & zest of 1/2 lemon; 2 tsp water, 1 t maple syrup. For topping: 1/16 tsp stevia extract powder (or 1 – 2 Tbsp Rapadura sugar), 1 t cinnamon, 1/8 tsp nutmeg; 1/2 cup almond meal and 1/4 cup halved pecans, halved again, 2 Tbsp melted butter. Covered with foil and baked, 350°F, 30 min; removed foil and baked another 30 minutes, checking every 10 minutes to be sure it wasn’t burning. Result: It is very good, especially with whipped cream. The pecans really make the topping wonderful. But it isn’t the same as a crisp made with flour and oatmeal topping. That is, it is delicious in its own right, but don’t expect it to be the same as traditional apple crisp.

Testing 2/20/15: Made half-recipe as before, but this time I used 1 large and 1 small honey crisp that are starting to get wrinkly in my root cellar, and I doubled the amount of pecans, chopped. The large honey crisp filled the 7½” ceramic pie pan, so I added most of the small one to round the top. This made it hard to keep the crumble-topping on top, but I managed. Baked as instructed (30 min covered, 30 min uncovered). Result: I’m glad I used more pecans as they are the star of this dish. The apples shrunk quite a lot; I definitely think the Macintosh are better. But I’m still lovin’ this paleo-treat.

Testing 5/1/15: Made full recipe in 9″ round cake pan using honey crips that had begun to wrinkle, and maple syrup. Baked as instructed (30 min covered, 30 min uncovered), but after it cooled I realized the apples were not tender. Next time I’ll bake at least 45 minutes covered, testing apples for tenderness before removing the cover; updated recipe accordingly. Result: apples not tender, but taste is wonderful, as before.

Testing 1/27/20: in past I’ve used Macintosh and Honey Crisp apples, with the Macs giving the better result. I’ve used up all my Macs and can’t find them in stores, so will try Golden Delicious. Will follow ingredient amounts for my 7.5″ ceramic pie pan, but will use my 6″ x 8″ rectangular pyrex pan (with a lid for storage), and adjust as needed. For apples: 1½ Golden Delicious apple, peeled, cored & sliced (2½ cups); ½ tsp grated lemon zest and 1 Tbsp juice (from ½ fresh lemon); 2 tsp water; ½ tsp maple syrup; For topping: 1/16 tsp stevia extract powder;  _ Tbsp Rapadura sugar; 1 tsp cinnamon and ¼ tsp nutmeg; ½ cup almond meal/flour; about ⅜ cup pecan halves, broken up; 2½ Tbsp butter. Baked at 350°F,Into over at 6:30 PM; uncovered at 7 PM – apples are very soft; check at 7:15 PM: starting to dry a bit; but give it another 5 min; out of oven at 7:20 PM; total times: 30 min covered, 20 min uncovered. Result: Apples pretty much turned into applesauce, but otherwise, as delicious as before, especially after chilling overnight in fridge, and when topped with fresh or frozen/thawed blueberries and cream!! Next time, try a different apple. and when using my 6×8 pyrex pan, use more apple and almond meal mix (I’ve updated ingredient amounts for 6×8 pan above, accordingly).

Testing 6/23/20: This time I used the last of my 2019 honey crisp that was still amazingly crisp 9 months after being picked. It is a fairly large apple, so was perfect size for my 5″ x 7″ pyrex pan, filling it ⅔ full. I followed instructions for the smaller size recipe, using ½ tsp maple syrup for the apples, and a tiny pinch of stevia extract powder plus 1 tsp Rapadura sugar for the topping. Oops, I forgot to mix the melted butter with the almond meal mixture before scattering over apples, so I poured the melted butter over the top as evenly as possible. Had to go to an appointment, so I let it rest on the counter, covered, while I was gone, before baking. Into preheated 350°F oven at 2:10 PM; lost track of time so didn’t check after 30 min (2:40); realized error at 3 PM; removed cover and baked another 15 min; out at 3:15 PM. Let cool. Result: Apples kept their shape; topping is nicely crunchy and buttery. Served with cream and fresh blueberries. Delicious; not too sweet, just the way I like it. However, most people would like it a bit sweeter, so I would suggest using the higher end of the range for sweeteners in this recipe.

Testing 10/26/21: I haven’t made this in a while, but I got a lot of apples this year so decided to do a 5×7 pan size. Used 2 smallish Honeycrisp apples, stevia (w inulin) and lemon juice for the apples. Used a combo of regular stevia (extract) and Rapadura sugar in the topping w cinnamon, nutmeg and cardamom, along w ¼ cup each sprouted spelt and almond meal flours and 2/3 of the ground pecans as written. Into oven (w 2/3 of the pecans mixed with flours, etc) at 5 PM; checked at 5:25 PM, and added remaining pecans. 5:45: Not quite done; 5:55 removed from oven to cool. Result: Served with thick cream. Apples are more like applesauce, but it is still delicious.

Testing 11/2/21: This time I used my 6×8 rectangle pan with lid. Used 3 freshly picked Macintosh apples (2 large and 1 medium size), and ½ cup (8 Tbsp) each sprouted spelt flour (a pastry flour) and almond meal flour. For sweetener, used ⅛ tsp powdered stevia with inulin for apple mix; and used scant ¼ tsp stevia extract powder and 1 Tbsp Rapadura Sugar (I don’t like it real sweet) for topping. For spices I used: ¾ tsp cinnamon, and ¼ tsp each nutmeg and cardamom. I decided to try using melted butter (4½ Tbsp) for the topping instead of cutting in cold butter, as it would be easier. Ground a bit more than ½ cup pecans; used 2/3 of them in crumbled topping and reserved the other 1/3 for sprinkling over topping after first 25 min bake.  Did not use the cover over the pan. Otherwise as written. Baked in preheated oven for 25 min, then pressed down with a fork and sprinkled reserved 1/3 of ground pecans over. Baked another 20 min, but not quite done so baked another 7 min, and removed from oven to cool. Served with thick cream. Result: Delicious, tho the apples shrank quite a bit, so could use more apples. I’ll test 6×8 pan next time using 4 or 5 apples.

Testing 12/3/21: same as 11/2 test, except: used 2Tasted a serving at 8″40 with heavy cream on top; delicious. ½ small-medium Macintosh apples and 1 medium Honeycrisp; filled pan just above half-way. Also used walnuts instead of pecans, since pecans are not available right now. Into preheated 350°F oven at 7:34 PM. checked and pressed-down, and sprinkled reserved chopped walnuts over at 8 PM (26 min). Check again for doneness after 27 min (8:27 PM); apples are soft, but topping needs more time. Result: Checked again after 8 min (8:35 PM); It seems done; don’t have to push it down much and nuts are lightly browned. Removed from oven to cool on a rack for an hour, then tested a small serving w added fresh pear slices and heavy cream (not whipped). Delicious; can’t really tell it is walnuts instead of pecans.