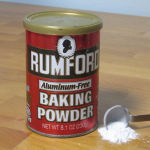 In Part 2 we explore how much baking soda and/or baking powder is needed for a particular recipe, and which to use.

How Much to Use?

When creating your own recipe, or altering an existing recipe, it helps to know how much baking soda is needed to leaven the batter; this is also called ‘soda equivalent’.* There are three main factors (detailed below).

Factor #1: Soda equivalent based on amount of flour

Use this as a rule of thumb/beginning point (the final result will also depend on the other ingredients in the recipe, and how they are mixed. (1, 3, 7)):

Factor #2: Soda equivalent based on amount of acidic ingredients

If the recipe includes acidic ingredients (such as an old-fahioned recipe or a pre-soak flour recipe), determine how much soda is needed to neutralize most of the acid (which also leavens the bread).

NOTE: I used a recipe for cornbread in Nourishing Traditions (8) as a guide to derive the equivalence. The recipe calls for 2 tsp baking soda and no baking powder for 1 cup buttermilk (and 3 cups flour/cornmeal).

The 2 tsp soda equivalence of the acid compares in the same ball-park with the 1 1/2 tsp soda equivalent needed to leaven the 3 cups of flour/cornmeal in the recipe. But for some recipes, this factor will lead to a larger soda equivalence than the flour factor. In this case, the excess buttermilk or other acidic ingredient is needed for texture or flavor, or it could be a mistake.

If you want the baked goodie to be nicely golden brown, you want just enough of the soda to remain (not be neutralized) to enhance browning via the Maillard reaction (between amino acids and sugars in the mix). (7)

Clearly, there are a lot of variables to consider, that only testing can resolve and reveal.

Some recipes include both baking soda and baking powder

Such recipes are hedging their bets. Baking soda is added to neutralize the acid already in the recipe, and baking powder is added for leavening. But do you really need both?

A baked good is a delicate dance of flavor, appearance, and body. Some acid gives a nice flavor to a dough, but too much might overwhelm, and it will certainly keep the baked good from browning as much as it can. Still, the batter might not have enough acid to lift the entire quick bread enough just using baking soda—thus, some recipes call for both ingredients [baking powder includes an acid].

This is certainly possible (baking soda was used long before baking powder was invented in the 1800s (6)), if you keep the following in mind. If the recipe is:

It is important to note that once you have baking soda and an acid together in a batter, it begins to produce CO2 immediately. Act quickly to get it into the oven before all the CO2 is released.

In other words, each 1 tsp baking powder contains ¼ tsp soda and ½ tsp cream of tartar, plus ¼ tsp cornstarch to total 1 tsp of the mixture.

Then calculate the soda equivalence as follows:

This is your starting point to begin testing and refining your recipe.

See my 'About' page
View all posts by Cat →
This entry was posted in Flour, Grain, Starch. Bookmark the permalink.