Basic Roast Leg of Lamb, with Herbs and Searing Options 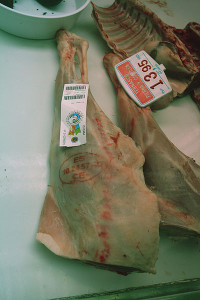 When I retired and moved back to Montana from Portland Oregon, I had much more time to experiment with recipes. My local grocer regularly stocked the meat case with lamb cuts including boneless leg of lamb, boned and tied, from Superior Farms.

I’d never cooked a leg of lamb before (though I’d had it many times at my favorite Greek restaurants in Portland) so did a bit of research online and combined that with a recipe that came with the Superior Farms roast, and came up with this basic recipe.

I learned that searing the meat before roasting improves/enhances its flavor and the color of any sauce made from the drippings. It can be done on stovetop or in the oven, so I started with oven searing for this recipe. (See Lamb Roast with Garlic & Rosemary for instructions on stove-top sear, which provides more flavorful dripping and browned bits).

Another option is to do a reverse-sear, meaning you sear it after the roast has mostly cooked.

Roast Leg of Lamb, with Herbs (for example, Garlic & Rosemary) and Searing and Slow-Roast Options

I’ve adapted this recipe from Superior Farms, the source of my first leg of lamb (1)  with things from Serious Eats (2) and What’s Cooking America (3). Lamb Roast with Garlic & Rosemary, and Optional Mint Sauce is very similar but includes a Deglaze Sauce or Mint Sauce.

This was my first experiment with a boneless leg of lamb roast, and it was a great success. (Nov 28, 2010). However, the one I purchased was butterflied but not rolled and tied. I seasoned all sides of the roast and then rolled and secured it with steel turkey-trussers. This allowed seasoning in the middle of the roll, which is a good idea, I think.

The roast did produce a lot of fat in the bottom of the pan, but since the roast was supported on top of the veggies, it was not greasy.

This basic recipe sears the roast in the oven at 425°F, then roasts at 325°F; if you want to do a slow-roast, use a temperature at or below 300°F, and add a bit of moisture to the pan (water or broth/stock). Alternately, you can do a reverse-sear instead of searing prior to roasting; see Reverse-Sear Roast Method (About) for more.

If you are put-off by the wild flavor of lamb, or have never roasted a lamb before, you might be surprised at how the choice of herbs/spices can improve the flavor of the roasted meat. Especially those spices one normally associates with baked goods (cookies, etc), such as allspice, cinnamon or nutmeg, which turn that wild flavor into something amazing. Check out “Cat’s Lamb Spice Rub” on this site, which includes allspice, cinnamon, cayenne and black pepper, which is what I use in addition to the dried rosemary leaves.

I think that yukon potatoes cut into wedges and seasoned with salt and pepper would make an excellent addition to the veggies in the bottom of the pan. However, because the roast cooks in less time than required for potatoes, it would be a good idea to parboil or steam them a bit before seasoning and adding to the roasting pan. The fat that drips off the meat will give them a wonderful flavor.

11/12/15 with traditional sear (before roasting): Used 2 lb bone-in leg of lamb. Embedded slices of garlic in the meat, then seasoned with rosemary, allspice, salt and pepper. Parboiled 2 yukon gold potatoes (cut into wedges),  1 large carrot (cut into 1″ sections), and half red onion, cut into wedges. Used potatoes for roasting separately (see Roasted Potatoes with Garlic & Rosemary). Tossed remaining veggies with olive oil, garlic and mix of rosemary, allspice and black pepper. Placed  veggies in bottom of roasting pan in one layer. Placed seasoned roast on top and into 425°F oven at 6:25 PM to sear. At 6:45 (20 minutes to sear), reduced oven to 325°F; only 120°F internal temperature at 7:15 (30 min); 122°F  at 7:25;  128°F at 7:33 PM (18 minutes); veggies are tender. Removed from oven to rest, lightly covered with foil, until about 7:45. Carved and served at 8 PM, with the roasted potatoes, braised lima beans and broccolini, and cooked beetroot. Result: The lamb is medium rare (just as I like it) and delicious; rosemary, garlic and allspice are an excellent flavoring combo; roasted veggies are also delicious, but the onion wasn’t quite done. Next time, sauté lightly before adding to other veggies. The braised lima beans with broccolini is an excellent accompaniment.

3/11/16: Testing slow-roast with reverse sear with 2 lb bone-in leg of lamb roast. Rubbed with rosemary, allspice, salt and pepper that I ground together in my mortar (about 2 tsp, ground). Parboiled 2 potatoes and cut into quarters; added pieces from 1 carrot, half a fennel bulb, and ¼ sweet onion, and tossed with dressing (3 Tbsp each lemon juice and olive oil, seasoned with oregano, salt and pepper). Placed veggies in bottom of roasting pan; set roast on top and into 300° F oven at 4:38 PM. Reached 115° at 6:00 PM (1 hr 22 min). Removed roast to platter and tented to rest about 1 hour. Returned veggies to oven to finish roasting, and returned roast to oven at 7:00 PM. Reached 125°F at 7:20 PM (20 min). Total cooking time, 1 hr, 42 min. Meat had reached temp on the top, but was still quite rare near the bottom. Next time, turn it over halfway through the sear, or sear on stovetop. Result: The herbs are delicious; meat was tender and tasty. Veggies were good, too, but got scorched during the sear.

6/24/18 testing of 3 lb bone-in leg of lamb and Roasted Potatoes with Garlic & Rosemary. Used same rub as previous test but without salt (3); cut up 1 carrot and sliced ¾ of a large red onion. Prepped good-sized Yukon gold potato separately, but rated both in oven, side-by-side, as detailed below

5/24/20: Reverse sear in oven.  Used 1.9 lb pre-seasoned leg of lamb with pop-up thermometer. Cut up 1½ carrots, 1 celery stalk with leaves, 1 small fennel bulb with leaves, ½ sweet onion. Par-boiled (in steamer) 1 Yukon gold potato about 6 min, then cut into 4 wedges. Arranged veggies in blue French oven, with the potato quarters around the edge. Added about ½ cup veggie broth over veggies; scattered fennel leaves over all, then set roast on top and into preheated 300°F oven at 4:30 PM. Checked temp: 100°F at 5:15 PM; 115°F at 5:43 PM; time to reverse sear. Raised oven temp to 475°F and checked temp: 128°F at 6 PM (1½ hours total). Removed roast to rest; most veggies are done, but potatoes need more time, so moved them to my steamer to finish while my beet re-heats. Meanwhile, I’ll cook some broccoli. Result: Lamb was done the way I like it – rare. Veggies were good too. But I wish I knew what the pre-seasonings of the lamb were, as I could not taste them. I prefer to taste a bit of allspice or cinnamon, but neither of those were present.

10/29-30/20: Used 1.6 lb boneless leg of lamb; let it warm to room temp, then dried it with paper towels, buried garlic slivers in various places, rubbed with my lamb spice-rub/granulated garlic/butter-mix (even tho I wiped the lamb as dry as I could, it was still hard to spread the spice-butter mix over the meat and have it stay put. Next time, I won’t use the butter). Then into a glass container with lid to rest in the fridge about 24 hours. 10/30 Removed from fridge to warm to room temp at 4:30. Cut up veggies (carrot, celery, fennel, red onion) and placed in bottom of roasting pan, added water, then set roast on top, fat-side up. Placed in preheated 425° F oven to oven sear for 15 min, then reduced to 325° F; most of the water had evaporated so added another half-cup. Roast: Checked after 20 min, but only to 110°F; checked after another 10 min – up to 120°F; reached 130°F after another 10 min (40 min total at 325°F), so removed from oven to rest 10 min. Veggies are not quite done, so put back in oven for another 10 min. Drained liquids into cast iron pan, and saved the veggies. Added vermouth and balsamic vinegar to liquids and thickened with tapioca starch on stove-top; seasoned to taste with salt and pepper for a flavorful sauce; added the veggies to the sauce and stirred to combine. Result:  Roast is medium rare and delicious, but it is quite fatty. Sauce with veggies is also delicious but I wish I’d used more carrots since I didn’t add potatoes.