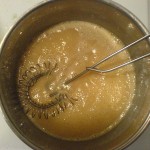 This was my Mom’s favorite pudding, but she never made it from scratch. Instead, it was a box of Jello Butterscotch Pudding. So one time when she came to visit me in Portland after the end of tax season, I made a scratch batch for her. She was impressed, but continued to make her own from the box.

Then one time, when we were spending a week at Cannon Beach, we went to check out a new restaurant that featured Persian food. A version of butterscotch pudding was their house dessert, so of course we had to try it. It was wonderful, much better than the one I made for myself. So we chatted with the husband and wife who owned the restaurant and learned that the husband – the chef – had been the chef for the last Shah of Persia (Mohammad Reza Shah Pahlavi), but they had to flee the country when the Shah was overthrown in 1979. No wonder his dessert was so wonderful!

I don’t pretend that my recipes come anywhere close to what that Chef served, but the first one is good. The second one is quicker to make but does not have much butterscotch flavor.

Molasses or brown sugar (which contains molasses), along with butter, is essential for the butterscotch flavor.  It simply cannot be duplicated with stevia or other non-sugar sweeteners alone.  However, Rapadura sugar naturally includes molasses, and is a more healthful choice.  For more information on butterscotch and other caramelized sugars, refer to my Caramelized Sugar (About) article.

The original recipe calls for ¾ cup brown sugar.  Using at least half of the sugar as Rapadura, with the remainder substituted as stevia, provides the right flavor while cutting down on total sugar.  Dark liquid stevia extract is the best form to use in this case for its slight molasses flavor, whereas the extract powder can give it a bitter taste.  To make up for the lack of molasses in stevia, I also add a bit of unsulfured molasses as well; the more Rapadura you use, the less molasses you need to add.

I do not recommend coconut milk as a milk or cream substitute in this pudding; its strong flavor competes with the butterscotch flavor.

I provide two different recipes for butterscotch pudding; I have more experience with the second version, but the first version uses fewer saucepans.

The first version prepares the butterscotch and the starchy mixtures separately, then combines them just before chilling. The second version does not prepare them separately, which means the sugar is not caramelized before mixing with the other ingredients.

This recipe is adapted from epicurious.com (2) and serves 6 – 8.  The original recipe calls for 1 ½ cups packed dark brown sugar, which is melted and caramelized before mixing with cream and then milk and eggs.

Rapadura is a more healthful choice than brown sugar, but doesn’t have as much molasses flavor.  Adding a bit of molasses to the sugar before melting will increase the butterscotch flavor, which is especially important if you use part stevia to reduce the sugar in the recipe. I’ve not yet tested this with stevia, but have made it several times with all Rapadura.

You can play with the relative amounts of Rapadura and Stevia in the pudding mixture, plus ¾ cup Rapadura in the butterscotch mixture.  For example:

This recipe is adapted from bhg.com (1), and serves 6 – 8.  This pudding tends to increase greatly in volume when bubbly, so be sure to use a 3 quart saucepan.

The original recipe calls for ¾ cup brown sugar; I’m experimenting with the Rapadura/stevia ratio, adding just a bit of molasses to replace that lost in the stevia substitution.  First attempt was 50/50, with 2 tsp molasses.

My first attempt did not have a good butterscotch flavor; I think that’s because the sugar was not caramelized before adding the milk and cream (much the same as when making toffee sauce.

This recipe doesn’t use a double boiler, but I highly recommend using one; however, the cooking time will be greater.

Serving Suggestions for All Creamy Puddings