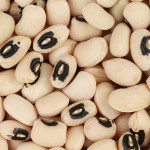 Mmm, the mention of black-eyed peas makes my stomach growl in anticipation of beans in a rich skillet sauce.  They are really a bean, but both beans and peas are legumes; and both benefit, nutritionally, by an overnight soak or by sprouting, before cooking.

This recipe has similarities to another skillet bean dish, Hoppin John, but is traced to the Cajun culture rather than to Carolina slaves.

This recipe is adapted from Emily Skinner.com (1), and Moosewood Cooks at Home (2), and serves 4. The Moosewood recipe is vegetarian, but I do think it is more authentic to use home-rendered lard, or home-cured bacon or ham (without nitrite preservatives). While canned beans and tomatoes can be used, soaking dried beans and chopping fresh tomatoes is far superior.

This dish is great for an outdoor cookout. Pre-cook the beans, then cook the skillet recipe right over the campfire in a cast iron skillet or dutch oven, or in skillet over a grill.

Most commercial bacon is smoked and heavily salted.  I don’t like a lot of smoky flavor, as it overwhelms the other flavors. Much of the smoky flavor, as well as the salt, can be removed, by blanching:

Soak and Cook the Beans

Soak and Cook the Beans