There are three commonly recognized classes of carbs, all of which are discussed here: Sugars, starches and fiber (more on this, below). Carbohydrate is a form of stored energy found in:

These same carbohydrates form a food class for humans, that include simple sugars and chains of simple sugars.  Most dietitians divide carbs into three major classes: Sugars, Starches and Fiber. Read on for more detail.

The three commonly recognized classes of carbs, and the energy provided (in calories), by each, are:

But the field of carbohydrates is really more complex than that.

These are the mono-saccharides, and are typically comprised of 5- or 6-carbons arranged:

The remaining carbons have an alcohol group (OH) and 1 or 2 hydrogens (H) attached. Both the acyclic and ring configurations of glucose are illustrated, below (image is a combination of images from Wikipedia (1)). 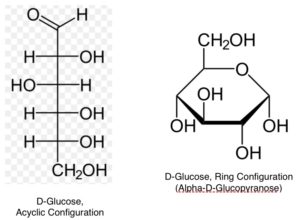 Most simple sugars are readily absorbed from the gut.  The most common of the simple sugars in human metabolism are:  glucose, fructose, mannose, galactose, fucose, and xylose.

These are the simplest chains, made up of two simple sugars linked together.  For example, sucrose (table sugar), which is one molecule of glucose bound to one molecule of fructose.  Other examples are: lactose (galactose bound to glucose) and maltose (glucose bound to glucose). Most disaccharides are digestible in the human gut, but some, such as lactose, are not digestible for many people who lack the proper enzyme (e.g., lactase to digest lactose) to break the sugar-to-sugar bond.

The enzymes in humans that break down specific disaccharides (2):

Perhaps the most common form of carbohydrate found in both the plant and animal kingdoms, it is comprised of chains of glucose molecules.  These chains come in two forms:  linear and branched. In the plant kingdom:

Glycogen is the “starch” of the animal kingdom, long and complex branched chains of glucose, used for short-term storage of energy.  It is not as compact an energy reserve as the triglycerides stored mainly in fat cells, but it delivers energy more quickly than triglycerides (fat).

We have two enzymes for digesting starch and glycogen: amylase and ptyalin (a specific type of amylase in our saliva).  The breakdown of starches to maltose (disaccharide of glucose) in our mouth and small intestine happens quickly and readily in our small intestine. Then maltase breaks down the maltose into its two glucose components. (2)

Fiber is a chain of monosaccharides that include those other than glucose in the mix. Our bodies only have enzymes that break glucose-to-glucose,  glucose-to-fructose, and glucose to galactose bonds. Bonds involving other sugars cannot be broken down by our bodies (because we don’t have the enzymes), though some can be broken down and converted to healthful fatty acids by bacteria in our gut (rather than to the component sugars). Others are flushed out with our stool.

We have long recognized two unique types of fiber that have different benefits for humans:

More recently a third type of fiber has been discovered, that has properties of both soluble and insoluble fiber, called “Resistant starch” (RS). It is not easily digested (resists digestion) and instead serves as food for gut flora that produce short-chain fatty acids that heal and protect the colon. It has half the calories of regular starch. One of the most important short chain fatty acids produced by the bacteria that digest RS is butyrate (see Butyrate for more about this fatty acid).

Other ways of classifying different types of fiber:

Cellulose: these are long linear chains of glucose, but can not be broken down by our bodies, so it falls into the larger class of fiber.

Fructan is another fairly common form of fiber, primarily found in the roots of the Compositae family (daisy, dandelion, burdock, echinacea, sunflower, chokes, etc.), but also in vegetables such as asparagus, green beans, garlic, onions, leeks, and wheat.  Generally, foods that store energy as fructans (fiber), do not store energy as glucans (starch).

The most well-known fructans are the inulins, which include shorter-chain fructo-oligo-saccharides (FOS); and longer-chain inulin. (Two other categories also exist:  levans and graminans). Inulins would pass through our digestive tract and out in our stool intact, were it not for the good bacteria (probiotics) in our large intestine, who, rather than breaking them down into simple sugars, ferment them into non-sugar products we can absorb, as well as a bit of gas (carbon dioxide, hydrogen, and/or methane).  If you are not used to eating inulin-rich foods, go easy at first.

Gums are another form of indigestible carbohydrate, or fiber.  For example, pectin, agar, guar gum, xanthan gum, gum arabic, and sodium caboxymethyl cellulose.  These carbs are chains of different simple sugars such as galactose, mannose, and glucose, and may be linear or branched.  Humans lack the enzymes to digest them, and most are also untouched by probiotics, so these carbs are excreted in the stool.

See my 'About' page
View all posts by Cat →
This entry was posted in Diet, Health and tagged carbs, fiber, starch, sugar. Bookmark the permalink.