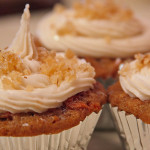 Somehow, carrot cake has always spelled “healthy,” and this recipe, adapted from Fine Cooking (1), is no exception. However, for many people, ‘healthy’ means low fat from vegetable sources, and applesauce to stand in for some of the missing fat, plus sugar to make it taste good.

To me, “healthful” means presoaking your whole grain flour and using minimally processed fats such as rendered lard, homemade butter, or cold pressed olive or coconut oil. Many don’t know this, but fat actually helps your body utilize the energy in the starchy flour, so one should not skimp in the name of “low fat.”

Nuts, naturally high in fat, are also considered healthy, but to reap the benefits of much of the nutritional value of nuts, they should be presoaked and dried before using. Start the presoaking and drying 2 days before using in the recipe. I usually make more than I need, then store the extra in a sealed container for future use. This recipe specifies finely chopped nuts, but I would coarsely chop them before the presoak process, then more finely chop what I need after drying them.

I’ve adapted this recipe from Fine Cooking. originally by Ellie Krieger (1). I like the idea of using applesauce with the spice and shredded carrots, and it can also be used to presoak the flour. So here’s my adaptation of this recipe.

* or use 1 cup whole wheat pastry flour (soft wheat), and add 1 tsp or more water to achieve a batter-texture.

This is my adaptation of the frosting recipe that accompanied the original cupcake recipe. Alternately, use  Rich Cream Cheese Frosting Version 1 or 2, which is made with cream cheese and butter; add ½ tsp grated lemon zest for each ½ cup cream cheese instead of the vanilla.