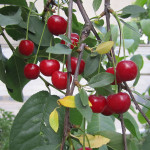 It’s cherry season here in the Flathead Valley, so while looking for a low-carb/high fat dessert using cherries, this recipe caught my eye. It reminds me of a fruit kuchen without the pastry crust on the bottom, which is perfect for my Paleo eating plan. [2015 note: In 2014 I changed from a Paleo to a Ketogenic eating plan, and had to give up this dessert because of the white flour/starch in the recipe. I now use Creamy Egg Custard (Baked), Extra-Rich & Low Carb, with berries added to the custard before baking.]

Clafoutis (a French word, pronounced “claw-foo-tee) is a simple, baked fruity custard pudding from France. The baking method is unique:

It is best served warm, with cold thick cream poured over.

In 2013 I began a ketogenic eating plan (to reset my metabolism and regain insulin sensitivity); for this plan I have given up simple carbs (sugar, flour and starch), except for very special occasions. I also replace all or part of milk with full-fat cream or coconut milk; and use egg yolks, or yolks plus whole eggs, instead of all whole eggs. However, because this recipe includes a fair amount of flour/starch, I now use Creamy Egg Custard (Baked), Extra-Rich & Low Carb, with berries added to the custard before baking.

NOTE: One of the suggested sweeteners is sweet dairy whey, which is primarily lactose. Do not use if you are lactose intolerant.

I include notes for using Julia Child’s method (from Epicurious (3)).

From testing, I discovered I really prefer using sweet dairy whey as the alternative sweetener in this recipe; it also allows me to reduce/eliminate the stevia.

Prepare as above for Cherry Clafoutis, except use 4 cups freshly rinsed blackberries or marionberries, brandy instead of kirsch, and add 1 Tbsp orange zest to the custard. Omit the cinnamon, but a pinch of ginger would be a nice addition.

Testing 6/17/13: Testing a half recipe using peaches with a bit of cinnamon and ginger (local cherries are not ripe yet). Ingredients as follows:

Poured thin layer in bottom of 5″x7″ pan, baked at 350° F 2 min; not beginning to set so raised to 400° F (takes awhile to reach that) Checked every 2 min for 9 min total. Lowered to 350° F. Added peaches in 2 layers (not quite 2 cups) and poured batter over. Just filled pan to within ⅛” of top. Into 350° oven, checked at 20 min; it is cooking around the edges but liquid inside. Continued checking ea 3 – 5 min. Total 37 min after adding fruit (46 min from beginning). Melted butter floating on top. Result: Flavor of peaches and ginger is nice. Not too sweet. The initial thin layer that is baked before adding fruit and custard, is like a soft crust. The crust nature is nice, but I’d rather the rest of the custard not have starch in it. So next time, I’ll make a thin bottom crust from almond meal and coconut flour. Also I’ll use sweet dairy whey instead of honey in the custard.

NOTE: In later testing I used sweet dairy whey instead of honey, and it was a good change; so good in fact that I could reduce/eliminate the amount of stevia. however, those who have problem with lactose should no use sweet dairy whey.

See also Low-Carb Berry Clafoutis with almond-coconut crust, which is really more like a fruit kuchen than a clafoutis.