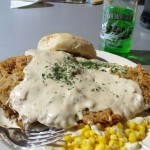 When I was a kid growing up in Montana, my family took a summer road trip vacation every year.  My favorite on-the-road dinner was chicken fried steak (with cream gravy, of course), or deep-fried prawns.  When I became a young adult, I eschewed all fried food in favor of stir fries (mainly because lard used for frying had been given a bad name so vegetable oils were used instead, which are not meant for cooking).

But now, as a mature adult, I’ve resumed my love of fried foods, provided the right fat is used.  No manufactured or GMO fats for me.  I want real lard (not hydrogenated), coconut or palm oil. (See Rendering Lard for method).

My Dad loved to make chicken fried steak, mostly because he loved the cream gravy. He always made extra so he could have some on toast in the morning. Which, of course, irritated my Mom. “Bill, why the hell do you save cream gravies that are not worth saving, but you throw away the rich dark gravy from a nice roast?” Well, I have to agree with Mom but I can also appreciate Dad’s love of cream gravy.

Since I don’t have the family recipe for chicken fried steak, I’m trying several recipes from the Southern Food website.

7/27/09:  Prepared as written using palm oil for the frying, and Walla Walla sweets in country gravy. The steaks lost a fair amount of blood to the vinegar water soak, but this didn’t affect the flavor. However, I misread the recipe for fat temperature as 300 degrees instead of 350, so the steaks took longer to get that golden color. Result:  Tender, with wonderful flavor, but I needed to add salt to the steaks at the table, which is OK.

9/6/14 (Labor Day): Prepared as written using 6 oz cubed steak, cut in half so could cook in my small cast iron skillet; halved ingredients in flour and egg mixes, and full amount of coconut oil (thought about using bacon but didn’t have any thawed). Oops, forgot to add paprika and salt to flour/cornmeal mix, so seasoned steaks after coating. For gravy, used ¼ sweet onion, 3 small button mushrooms  ½cup milk, and 1 Tbsp each butter and flour to make a roux. Result: Excellent; tender and tasty. Didn’t need more salt.