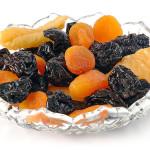 When I was in grad school in the mid 1970s, many of my fellow students were Persian – from Iran prior to the overthrow of the Shaw. They taught me how to write my name using their ‘alphabet,’ and introduced me to many of their favorite foods. I loved what I learned about their culture.

This recipe comes from Persian tradition, using dried fruits, olive oil and a special Persian spice mix called advieh. The dried fruit provides the sweet; lime juice provides the sour; and the spices provide a bit of each flavor, plus pungent flavor.

You can use either chicken or game hen.

This recipe is adapted from our local newspaper, the Daily Inter Lake. Feb 24, 2016 issue, but is originally from Food of Life: Ancient Persian and Modern Iranian Cooking and Ceremonies, by Najmieh Batmanglij (Mage, 2011) and reprinted by Gretchen McKay in the Pittsburgh Post-Gazette. The original name for the recipe is “Sweet and Sour Stuffed Chicken,” but since I don’t want to stuff a chicken, but rather just roast the stuffing and the bird together, I’ve changed its name.

The Persian spice mix, advieh, typically includes dried rose petals or buds, cardamom, cinnamon, and cumin, all ground to a fine powder. It may also include nutmeg, saffron, sesame and/or coriander.

Although the original recipe stuffs whole chickens or game hens with the prepared dried fruits, I would rather arrange them in a pile in the roasting pan and then place chicken pieces on top (but I provide instructions for both methods; stuffed bird directions are in [square brackets].

I would also like to try mixing partially-cooked white rice with the dried fruits; they would finish cooking during the first hour of roasting when the whole dish steams under the sealed parchment/foil cover. I think more liquid (such as chicken broth, or water flavored with a bit of rosewater) would be needed, for the rice to absorb. During the last 30-45 minutes of roasting, the rice would begin to caramelize where it rests on the bottom of the roasting pan, something I learned from my Persian friends is very Persian.

I cannot find the spice mix advieh in our rural Montana community, so I will make my own, using ideas from the original recipe, The Kitchn (2), and Wikipedia (3): see Herbs & Spices: Curries, for my recipe.

*Cat’s note: if I make this again, cut way back on amount of fruit, as that much sugar is not good for me.

2/26/16: Made half-recipe. Used 1 large chicken breast half (cut in half again) and 4 thighs, brined. Started with rub-mix of  ⅜ tsp salt, ¼ tsp pepper, ⅛ tsp turmeric, but ended up doubling that, in order to have enough to coat all the pieces. I updated recipe to include amounts as a range. For filling, used ¼ onion, 1 clove garlic with ½ Tbsp ea butter and olive oil; ¼ c each chopped apple, dried prunes, & dried apricots, 2 Tbsp currants, ¼ tsp ea salt & pepper, 1 tsp advieh (¼ tsp each cinnamon, cardamom & nutmeg, ⅛ tsp each cumin and coriander, and pinch saffron) and (I didn’t include ¼ tsp sugar since the dried fruits are so sweet and sugar is a problem for me); stirred in 1 Tbsp melted butter. Placed mix in oiled ceramic roasting pan; added chicken pieces on top and poured basting mix (2 Tbsp each olive oil and lime juice, 3 drops toasted sesame oil and pinch saffron. Could not get dried rose petals or rose water in the cracks between the pieces of meat and around the outer edges – the pieces completely fill the pan in a single layer. Sprinkled lightly with powdered garlic. Covered with parchment & foil. Roast: Into oven at 5:20 PM. Roasted, covered 1 hour; removed cover at 6:20 and roasted, basting (liquids are thick from the dried fruits I think), 30min more, until done at 6:50 PM. Total cooking time: 1.5 hours. Result: The flavor is orgasmic – out of this world. I served with white rice (mixed with the sauce and fruit mixture), braised kale, steamed beet, and a small side of coleslaw. However, the dish is too sweet for me, causing blood sugar issues and digestive upset. If I make it in the future, I would need to use a fraction of the amount of fruit; and I’d also like to try including the white rice in the dish, rather than as a side (see highlighted “I would also like to try” above.