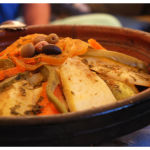 In case you are not familiar with Moroccan cuisine, a tagine is a stew, typically laced with fragrant spices, fruits and meat. In Morocco, a tagine pot (heavy clay pot with a cone-shaped lid) is set directly over coals. However, this recipe is quicker-cooking than a slow braise, and uses a saucier or other large saucepan with lid.

This recipe is adapted from Steven Cooks blog (1). It uses a whole chicken, cut into pieces (saving the bony backs and neck for another use, such as making stock). However, one could use 2 game hens, butterflied and brined.

If you cannot find Moroccan olives, use mixed Greek olives, cut in half if large. I highly recommend using brined olives as opposed to canned ones – you may find these in an olive bar in your local store, or in a refrigerated display.

Preserved lemons have been dry-brined in salt (using the natural juices of the lemon to dissolve the salt), to use during the seasons when fresh lemons are not available. These are easy to make at home, but of course you have to make them well ahead of the day you want to make this dish. I usually make up several jars to keep in my pantry. See Preserved Lemons (lacto-fermented).

The Saffron-Raisin Quinoa (as Couscous Substitute) recipe is found on a separate page; alternately you can make this with couscous, following the instructions to steam the couscous, and adding the saffron and raisins as in the Quinoa recipe.