It was 1981, I had just gotten a new cookbook:  A Passion For Vegetables, by Vera Gewanter (© 1980), and was headed for the Oregon Coast for a long weekend.  I wanted to try something new, something unlike anything I’d ever made before, and decided to try this French recipe.  I purchased all ingredients before I left and did some preparation in advance so that I wouldn’t have to take a lot of equipment with me.  I finished the cooking in my beach cabin’s kitchen.  Delicious!  And for more than a week after that trip, I could still smell the pleasant aroma of the almond-garlic-saffron-pepper paste in my car. 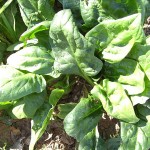 If you are in a hurry, you can use canned garbanzos, drained.  But I highly recommend cooking your own beans.  Especially cooking them in the mineral-rich liquid from the wilted spinach.  Mmmm.

This casserole is similar to another French dish from Provence, called Soupe de Pistou, and related to Spanish Braised Spinach with Chickpeas .

My adaptation of this classic French recipe serves 4.  It is important to make each of the “pastes” separately, in order to get the right flavor.  It’s a bit more work, but definitely worth the effort.

Regarding tomato paste: I don’t recommend using commercial tomato paste, as it likely contains HFCS, and leached lead solder from the can (or leached plastic from the BPA/BPS can liner). See also Homemade Tomato Paste (For Canning, Freezing, Refrigeration)

Retesting 1/5/09:  Although I’ve made this before with good results using fresh spinach or chard, I wanted to test using frozen spinach. I partially thawed two 16-oz bags of frozen chopped spinach, then dumped contents into saucier to thaw by warming over low heat, then allowed to cool a bit before squeezing out the liquid (for cooking the garbanzos).  Otherwise, I followed recipe as written, using fresh tomatoes for the tomato paste.  Result:  Finished casserole tastes great, but spinach resembled canned spinach in texture (overcooked and a bit slick), and there was too much of it.  Recommendation:  Fresh spinach produces better end result; if must use frozen, use only one 16-oz bag.