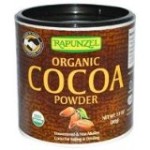 This recipe is adapted from one given to me by an online friend, Bonita. I’m helping her learn how to use stevia instead of sugar.

If you like nuts in your brownies, chop walnuts or pecans to make ½ cup. Soak overnight, then dry them at lowest oven setting, or lightly toast them.  See my articles: Soaking & Sprouting Nuts & Seeds and Toasting Nuts & Seeds for details.

2/8/14: Made half recipe and baked in 5″x7″ pan. Used: 5 Tbsp almond meal, ⅛ tsp salt, ¼ tsp baking powder; ¾ tsp maple syrup, rounded ⅛ tsp stevia; 1 ½ eggs, ½ tsp vanilla, 1 tsp coffee granules; 2 Tbsp each coconut oil & butter, ¼ cup cocoa powder. Stevia dissolved in the maple syrup, but because I used so little of it, much of it stayed in the small bowl and didn’t make it into the brownies. Baked at 350 for 20 minutes (because of small batch size). Result: Rose nicely in oven, then fell a bit while cooling, which is normal. Texture is good – nicely moist. However, not enough stevia so bitterness of chocolate is foremost. If make half-batch next time, I’ll add the stevia to the egg before beating, to ensure it mixes well. Recipe updated accordingly.