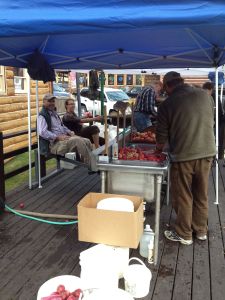 My small community has an Octoberfest celebration each fall, called Tamarack Time! in honor of our western larch trees (mistakenly called tamaracks by early settlers) which begin to turn golden in October. One of the events at this celebration is ESP’s community cider press* – people bring their apples and jugs, then take cider home. The apple grinder is made of mostly repurposed materials and powered by humans on recumbent bikes; the press is hand-operated. I use my cider from this event to make this and other recipes using cider, such as Chicken Normande (with Apples, Brandy & Cream).

*ESP, or Essential Stuff Project, is a local sustainability group of which I am a founding member and editor of The EssentiaList blog. We host this event as an example of our mission, which is to live sustainably and build a stronger local community.

This recipe is adapted from Fine Cooking, originally by Melissa Pellegrino (1). The original uses 8 thighs to serve 4, but I start with a whole chicken cut into pieces, using the legs (drumstick & thigh), wings and one of the half breasts (halved again, crosswise). I freeze the other half-breast for another use, and the back pieces for making chicken stock.

Another way to do this is to divide the bird into halves: First cut through the ribs on both sides to separate the  back pieces (to save for making stock). At this point you can brine and roast the butterflied breast/wings/legs to serve 4 – 6, or cut through the breast bone to divide the meaty halves (each half serves 2 – 3) and freeze one of the halves for future use. This is the method I use in the instructions below (using one of the meaty halves to serve 2 – 3). You can easily double it for both halves.

If using game hen(s): butterfly, brine and roast, then cut through the breast before serving 2 with each hen.

The best cider is freshly-pressed. But since the cider is cooked in this recipe, you can also use pasteurized cider. The cider meant here is fresh (sweet), not hard.

10/7/10: I used in-tact half chicken (without back), and did not brine because my fridge is so full there’s no room for the big bowl. I brushed the half-bird with olive oil, then seasoned with salt and pepper. Placed in my small oval roasting pan (it has ridges on bottom so I don’t need a rack), then followed recipe as written, using my hot oven to brown the glaze rather than my broiler because it is separate from the oven and I hate cleaning it. I also baked a peeled, cut-up sweet potato tossed with my basil-balsamic vinaigrette, and a little of the apple juice added to the baking pan. Result: Chicken is quite tasty and the sweet potatoes are a good addition; I updated recipe accordingly.

12/14/14: Used butterflied game hen and addition of sweet potatoes as written, to serve 2. I intended to brine the bird for 2 hours but forgot and it was in brine about 5 hours before I remembered. So then I soaked it in two changes of fresh water, soaking for 1 hour and then 2 hours, respectively, to reduce the salt in the meat. Then rinsed bird and placed it on a plate covered with paper towel to dry out the skin in the refrigerator overnight. Used maple syrup instead of honey in glaze because my honey had crystallized. Roasted 45 minutes; chicken had reached temperature but the sweet potatoes were not quite done – I should have parboiled them. So I kept glazed chicken warm while I continued to roast the sweet potatoes. Result: Quite tasty, not too salty (so the fresh water soak worked) This recipe is really quite simple and quick!