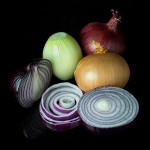 I’d never had this soup until I moved to Eugene, Oregon in 1970 for graduate school. There was a wonderful French restaurant there that served this soup every day, and it was SOOOOOO good! Flavorful, oniony broth with a slice of French bread (baguette) floating on top and drenched with melted cheese. Mmmmm.

This recipe is adapted from Fine Cooking (1), originally by Anne Willan. What makes this soup special is caramelized onions, homemade beef broth, and aged Gruyere cheese melted over croutons (or slice of baguette) on top.

The soup and croutons can be made up to 2 days ahead; store soup in fridge, and croutons in an airtight container at room temperature.

I use my own homemade beef stock, but the recipe for Roasted Beef Broth (2) at Fine Cooking sounds delicious too, made specially for this soup.

This makes a lot of soup; I cut the recipe in half and freeze half of that (just the soup, not the bread and cheese).

Gruyere is a type of Swiss cheese. It is becoming more common in American grocery stores, but if you cannot find it, you can substitute any of the Swiss cheeses, including Swiss and Emmentaler, but also fontina, Gouda or Jarlsberg can be used (3). Of these, my favorite is Emmentaler.