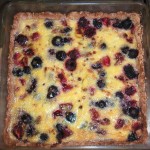 Kuchen is a German name for coffee cake.  I first learned of this wonderful treat from the Tassajara Bread Book, by Edward Espe Brown (1). He offers two style of Kuchen:  One style, the Fruit Kuchen (presented here) is tarte-like, with a crust on the bottom and a layer of fruit and custard on top. The other is Butter Kuchen which is yeast-risen and cake-like in texture with cinnamon streusel on top.

Wikipedia has a good discussion of the many types of Kuchens (2).

Fruit Kuchen, presented on this page, is great when fruit is in season. You can use many different types of fruit, singly or in combination; I’ve never tried it with apples but I think that would be delicious, too.

While coffee cakes are traditionally sweet, I prefer not to use refined sugar in my baked goods, so instead I use stevia, raw honey and date “sugar”.  The latter is simply ground dried dates, and makes a great substitute for brown sugar in crumb toppings. Another choice for crumb toppings in Rapadura sugar (unrefined sugarcane juice), but of course, it is real sugar.

This is a layered coffee cake, more like a tarte than a cake, with a layer of fruit and a layer of custard. Ii’ve adapted it from the Tassajara Bread Book, by Edward Espe Brown (see my Beloved Cookbooks for more about this book)

Fruits: you want juicy fruit(s) for this treat; apples don’t fall into that category.

You can use sliced peaches, apricots or plums or a mix of these fruits; I prefer fresh ripe fruits to frozen. Or use cherries, or berries. My favorite is a mixture of fruits, which is my favorite. To remove skins from fresh peaches/apricots/plums, dip in boiling water for 10 – 15 seconds, then peel.  If peaches are not so ripe, or skins are hard to remove, leave longer in the boiling water. If your peaches are quite ripe, use the lesser amount of stevia or Rapadura; if they are not so ripe, use the higher amount.

When those fruits are not in season, I use frozen berries – all one kind or a mix.

Crust: The original crust does not include the addition of water – just the dry ingredients and butter, then you press it into the pan. Nor is it a pre-soak crust.

My preference is to make it with yogurt pre-soak crust, which is then pressed into the pan after the overnight soak; it has a texture similar to a crust made with ground cookies, and is what I use for my Tarte aux Poires. Or you could use a grain-free, gluten-free option. Or use sprouted wheat pastry flour or sprouted spelt flour for the original crust (I’ve not yet tried the sprouted flour option).

If you like a bit of nuttyness in your crust, or just want to cut down on grains, try my Spelt/Wheat, Quinoa & Almond Meal Kuchen Crust, Presoak Method.

Note: the method is the same as above for all sizes; only the amounts of ingredients change.

When I’m avoiding grains, I use this smaller version with an almond/coconut pastry in my 9” square baking pan (see photo, above), but as with the larger version, any of the crust options can be used.

This version uses  my yogurt presoak crust for 7½” round pie pan; see Yogurt Crust (Wheat or Spelt) for more detail. I’ve not yet tested this size of filling, but crust size has been tested.

I’ve not yet tested this size of filling, but crust size has been tested.

At the moment (July-August, 2012) I’m avoiding all high-carb seeds, which includes true grains and pseudo grains (like quinoa, buckwheat etc). But nuts are OK. So I tried this dessert using an Almond Meal & Coconut Flour Pie Crust. I only used half of the mix, because I made a smaller, 9×9 baking pan (instead of 9×13); I put the remaining half in the fridge for later.

The first experiment used apricots and serviceberries for the fruit. It was good but the crust absorbed moisture from the fruit or custard, making it too soft.

The second experiment used the reserved nut crust mix that was saved in the fridge for about a week. I made this in a 9×7 baking pan (so was a bit thicker than before), and used peaches and blueberries for the fruit. This was much better – in fact, it’s almost better than with the spelt-yogurt crust I’ve been using (recipe above). I don’t know if it was better because of the long rest in the fridge, or because it baked a couple minutes longer before I added the custard.

Testing 10/15/08:  I made this using fresh plums instead of peaches.  Used stevia in the crust, and maple syrup in the custard.  Forgot to sprinkle filling with cinnamon/sweetener, and forgot to bake the crust and filling before adding the custard.  Sooo, I mixed the cinnamon with about 3 Tbsp Rapadura sugar (plums are sweeter than peaches, so don’t need so much sugar) and sprinkled that over the custard and then baked the whole thing for about 10 minutes at 400 (didn’t want to overheat the custard), and additional 40 minutes at 325.  Turned out great that way!

Testing 6/21/10: This time I’m trying a new crust for this dish. I’m wanting to avoid wheat, and use pre-soaked grains as much as possible, so I made Yogurt Crust-II with Spelt, half recipe, with mixture of spelt, oat and barley flours. It rested on counter for 24 hours. But instead of rolling it out, I pressed it into a 10″ pie pan. It’s more moist than the original kuchen crust, but spread easily into and up sides of pan. Covered with layer of blueberries, sprinkled with sweetened cinnamon and from this point followed the recipe, using half the amount of custard ingredients. Result: Baked nicely, easy to cut after cooling. Crust tastes great, and is slightly crumbly like the original crust. Filling is as good as it always is.

This was so good, that next I’ll try making the original kuchen crust but using presoak the flour in yogurt/water mix, and without the baking powder (which would otherwise neutralize the acidic yogurt needed for the presoak).  See next.

6/30/2010:  I sifted 1 cup whole spelt, ½ cup oat and ½ cup barley flours with ½ tsp salt and ⅛ tsp stevia (no baking powder because it would detract from the acid in the yogurt needed for the soak). I mixed in ⅓ cube of melted butter (1/6 cup), then put in remaining ⅔ cube cold butter. Very buttery. Then I mixed 2 Tbsp yogurt and 2 Tbsp cold water and worked that into the dough. It was too wet, so I added more barley flour until the texture felt right (a little more than ¼ cup). Formed into ball, covered with waxed paper, and let it rest on counter overnight. Next day, pressed it into pan. Then followed recipe as written.

Result: crust is very similar to original crust in texture and taste. Will be my first choice method from now on. However, to avoid adding more flour, I now mix 1 Tbsp yogurt and 1 Tbsp water for the soak. If using wheat, more moisture would be needed; you could try the 2 Tbsp each water and yogurt.

Testing 1/29/2013: I’ve been having trouble with this crust recently – it’s been too dry and wouldn’t form a ball. So this time I used 3 Tbsp melted butter (as b4) and 7 Tbsp cold butter (10 Tbsp total). Used 1 Tbsp yogurt and 2 Tbsp water. Used 1 ½ cups whole spelt, ¼ cup whole barley and ¼ cup whole kamut flour, plus stevia and salt as original. Felt much better and actually formed a ball readily. Filled with peaches (⅔ bag, frozen) and raspberries (⅓ bag, frozen), which was delicious. but next time I’d use more berries, fewer peaches.

Testing 12/8-9/19 for 6″x8″  rectangular pyrex pan: Made yogurt presoak crust for 6×8 pan; let rest 12/8, 11 AM – 12/9, 6 PM, then pressed into pan. Prepared fruit: used 2/3 of a bag of frozen mixed berries (enough for a single layer of fruit), 1/2 t cinnamon and scant ¼ stevia extract powder. Sprinkled cinnamon/stevia mix on fruit scattered over crust,. OOPS, forgot that baking time. Whipped together 2 egg yolks, most of the whites, 1¼ tsp maple syrup and 4 Tbsp cream. Reduced oven to 325°F, and poured egg mixture over the fruit; not enough custard so trickled some cream over and mixed with a toothpick before putting into oven at 7 PM. Checked after 40 min but not quite done; another 5 min and it passed the knife test – total 45 min. Removed to rack at 7:45 PM to cool a bit before serving. Result: Very good, but the added cream wasn’t mixed well with the custard. Also perhaps a bit too much cinnamon; next time, use 1/4 tsp.