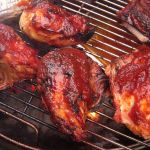 I’d never heard of za’atar until I saw this recipe in the July 2015 issue of the Spry Living supplement in my local Daily Inter Lake newspaper. I love Middle Eastern foods, which is what attracted me to this recipe.

The recipe introduction by Rebecca Katz and Mat Edelson says, “The antioxidants in za’atar, a popular Middle Eastern spice blend, may increase feelings of well-being.”

This recipe is adapted from one in July 2015 issue of the Spry Living supplement in my local Daily Inter Lake newspaper, originally from the cookbook, The Healthy Mind Cookbook, by Rebecca Katz and Mat Edelson. (1)

Their recipe for the za’atar herb and spice blend makes more than needed for the chicken, but keeps for months; store and sprinkle on veggies, dips, fish or eggs. And, of course, on chicken as in this recipe.