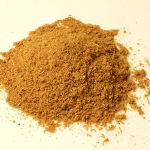 I received a nice outdoor gas grill as my retirement gift, but I don’t yet have a deck or patio to set it up. I do hope to get that added to may yard in the near future. Until then, I do all my grilling on an old-fashioned charcoal grill. If I had a cast iron grill pan (with a grooved bottom), I could use that indoors on my gas range.

I have not yet tested this recipe.

This recipe is adapted from one by Jil Wendholt Silva featured The Daily InterLake May 5, 2010 edition (originally from McClatchy Newspapers and The Kansas City Star) and serves 4.  I’ve adapted this to serve 2.

This is similar to Chicken Tandoori or Vindaloo in the flavorings, but served with grilled veggies on pita, like a sandwich. This recipe calls for breast meat, but East Indian cuisine prefers dark chicken meat such as thighs for its curries.

I prefer to brine chicken breasts before cooking, to retain moisture, especially when the skin is removed, as in this recipe.  I prefer to leave the bones in the breast during cooking, to enhance mineral content of the meat.

Garam Masala is a wonderful curry spice mix from India, and is available in bulk in most natural food stores. Or you can made your own; see my recipe in my Curries & Spice Blends article. It is not a particularly hot cuurry, but you can add chiles or cayenne to turn up the heat, if desired.

Requires a covered grill, or a cast iron grill pan for use on top of stove. I’ve not yet tested this recipe.