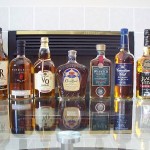 Hard sauce is mandatory with Plum (Christmas) Pudding and Bread Puddings, but is equally delicious with many other desserts. This version is adapted from Betty Crocker’s Cookbook (1), and specifies powdered sugar, but superfine granulated sugar will also work.  My preference is Rapadura powdered sugar (from dried sugar cane juice), or Make Your Own Unrefined Powdered Sugar.  Maple sugar is another alternative which I’ve never tried; it would lend a light maple flavor to the hard sauce. When properly chilled, hard sauce takes on the ‘hardness’ of cold butter, and is not a pourable sauce.  One attractive way to serve hard sauce is to spoon it into a decorative mold before chilling, then place a formed sauce on top of each dessert serving.

This recipe is adapted from the Irish Heritage Cookbook (2).  If you don’t have a double boiler, you can use a heavy bottomed saucepan, but you will need to watch the cooking mixture very closely so that the eggs don’t curdle.

This is adapted from Wonderful Wonderful Danish Cooking, by Ingaborg  Dahl Jensen.