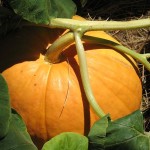 Giant pumpkin on the vine

This very rich recipe for holiday occasions serves 10, and is much more flavorful than the Libby’s canned pumpkin recipe (3). I make this in my quiche pan, but you could use a deep dish pie pan. There’s usually some of the filling left over which you can pour into a custard cup (without the crust), set the cup in a pan water, and bake as you would custard.

I make this with a part whole-grain pre-baked crust in my 10″ ceramic quiche pan. I prefer to use spelt, as it has a nuttier flavor than wheat, but either works well.

This pie requires that the crust be pre-baked and cooled before filling and baking the pie. I have not yet moved my pie crust recipes, so I include my traditional crust recipe sized for my quiche pan, here (see below the filling recipe). (2015 note: I have since moved all my pie crust recipes; see Pie & Tart Crusts/Pastries)

This pie filling is very rich and flavorful; consider: it contains molasses and Myer’s dark rum! as well as the more usual ingredients.

The original recipe uses some ingredients for which I prefer to make substitutions:

Sweetener: The original uses a combination of brown and white sugar, plus molasses to sweeten and flavor the pie. If you use these, be sure to use cane sugar, rather than “white sugar” which is made from GMO sugar beets. And instead of brown sugar, I recommend Rapadura sugar (Organic dehydrated sugar cane juice), which is lightly brown.

If you need to avoid sugar, I recommend xylitol (a sugar alcohol) instead of white sugar, which has a very low glycemic index and 40% fewer calories than sugar. My preferred option is to use Stevia extract powder for all or part of the brown and white sugar, but I would keep the molasses because of the flavor it adds.  However, because I serve this only on holidays, I figure it’s OK to indulge in real sugar for the occasion – as long as I don’t eat the entire pie by myself!

Molasses: If you really want to use the most healthful version, choose blackstrap molasses. But for best flavor dark, un-sulfered molasses is preferred.

Spices: This recipe uses its own mix of individual spices (cinnamon, ginger, nutmeg and cloves); alternately, you can use your own homemade pumpkin pie spice mix.

Milk: The original uses canned evaporated milk, which is thicker and sweeter than fresh milk; but I prefer to use ‘light cream’ which is richer than half-and-half but not as rich as heavy or whipping cream. NOTE: if using raw cream, use ½ cup cream and ¼ cup milk as a ‘light cream’ equivalent.

This pumpkin custard filling is adapted from The Vegetarian Epicure Book 2, by Anna Thomas (2)

This is a standard pie crust, using part unbleached white and part whole grain pastry flour (soft wheat or spelt), which gives it a slightly sweet, nutty flavor (and more nutrients).  Note that spelt will require less water than wheat. This recipe has been a standard in my kitchen for years (1); I’ve adapted the ingredient amounts for a 10″ quiche pan (photo, left, from Amazon (6) or 9″ deep dish pie pan).

Alternately, you could use my Yogurt Pie Crust recipe (sized for 10″ quiche pan), that presoaks overnight before rolling. I’ve not yet moved this recipe, so you can find it on my old site at Spelt Pie Crusts (4) or Wheat pie crusts (5) and scroll down to the ‘Yogurt dough’ version. The benefit of using a presoaked flour recipe such as these, is to make the minerals in the grain available for absorption, and deactivating some of the anti-nutrients in the grain. See Grains: Soaking & sprouting for more on this.

To make ice-cold water, put some cold filtered water in a cup or bowl and add a couple ice cubes.  Let rest for a couple minutes before adding to the dough.  Many people swear by adding a dash of cider vinegar or lemon juice, for maximum flakiness.

If you prefer, you can use all butter instead of the butter/lard combination. I do not recommend using margarine or other spreads for pie crust, nor Crisco or other shortening brands.