Update recipe links in text as I finish them:

As a kid, I’d never had homemade ice cream, but my cousin Emery was a cheeseman at the local Glacier Dairy.  I spent at least a month with his family every summer, and he brought fresh ice cream for us kids just about every evening.

But today’s commercial ice cream is nothing like that old-fashioned ice cream from the local dairy. Today’s version includes a lot of questionable additives and highly processed ingredients which I prefer to avoid. Instead, I make my own.

My real love for this treat started when I was a graduate student at the University of Oregon in the spring of 1971.  The Viet Nam war was raging; college demonstrators were burning down the local ROTC.  But in my chemistry lab where I was the instructor, we were studying a phenomenon known as freezing point depression.  It’s a way of determining how much of a particular substance is dissolved in an aqueous solution, by how far below the normal freezing point of water, the solution decides to freeze.  It’s a very difficult concept for students to grasp.  So, I decided to give them a practical application as an example.

I bought an old fashioned ice cream freezer (wooden bucket in which a metal container is suspended, fitted with a churn inside the container and attached to a crank).  I brought it along with several containers of whipping cream, some frozen strawberries, some sugar and a box of rock salt into the lab, and set it at the end of the counter.  Then I went about my explanation of the planned experiment and the necessary calculations.  All eyes were glazed over, as expected.

So, I asked my class if they could think of a practical application of this phenomenon.  A savvy student noticed the stuff piled at the end of the counter and said in a questioning voice, “ice cream?”

“Well, does it have something to do with the salt?”  he asked.

“Yes, tell me more,” I encouraged.

“The salt makes the ice freeze at a colder temperature?”  He wasn’t at all sure of this.

“Yes, you’re right.  Now can someone else tell me why that’s important when making ice cream?”  But all they did was look at each other.

Then one of the girls shyly asked, “Because the ice cream needs a colder temperature to freeze?”

This was like pulling teeth, but amusing none-the-less.  “Yes, but why does it need a colder temperature?”

“I got it!” the original young man shouted, “because the stuff in the ice cream–the fat and sugar and stuff–makes the milk stay liquid at the normal freezing point; it won’t freeze until it gets colder.”

“YES!”  I shouted, pointing my thumbs up.  I looked around, wondering if they were ready for the next thing I was going to say.  Well, might as well just get it out.  “And you need as many particles of salt in the water bath, as there are particles of ‘stuff’ in the ice cream…”

They all chimed in together, “before the ice cream will freeze!”

While they went about their lab experiment with new comprehension, I put the ice cream together and started the churning.  Several of the students put in a minute or two of churning, and by the time the class was nearly over, the ice cream was ready and we all ate our treat: fresh strawberry ice cream.

This makes the smoothest ice cream, but requires a bit of prep work, prior to freezing the ice cream.  Basically you make a Crème Anglaise (Stove-Top Custard Sauce)  using milk (or cream) and eggs (or yolks), chill it, then add the other ingredients before putting the mixture into the ice cream freezer.  My Vanilla, Chocolate, Berry, Peach, and Lemon Ice Cream recipes are examples of this type.  Most commercial ice creams are also of this type.

This is the simplest to make, but often results in noticeable ice-crystals in the final product.  For this type, you simply mix milk, or milk and cream, with the other ingredients (such as fruit, nuts and/or liqueurs), then put into ice cream freezer to freeze.  My Basic Vanilla, Basic Chocolate and Maple Nut recipes are examples of this type.

Made with heavy cream and whipped eggs, this chilled dessert is a very rich “half-chilled” dessert. I include Berry Semifreddo as an example of this type.

True sorbet is made without milk or cream.  Instead, water, coffee, tea or fruit juice is used as the liquid.  I include Plum Sorbet as an example of this type.

Italian ice cream is all the rage now, with its intense flavor and soft texture.  Most Gelato shops make a product from milk, rather than cream, but it is just as authentic with a milk-cream mixture. Usually a custard method is used (see above).  I include Hazelnut Gelato as an example of this type;  Chocolate-Nut Kefir Gelato is also a gelato, but is made with kefir grains instead of milk/cream.

One popular ice cream variation is to use yogurt or other cultured milk product, instead of milk/cream. Vanilla Frozen Yogurt, Orange-Scented Frozen Yogurt, and Chocolate-Nut Kefir Gelato are examples of this type.

It is best to follow the directions that come with your ice cream freezer; I provide a review of the most common methods here.  This method is common to all recipes.  The Chocolate-Nut Kefir Gelato recipe uses a simple saucepan set in a bath of ice, but it could also be made using either of the ice cream freezers below.

See photo of Rival-brand hand-crank freezer, above; NOTE:  The hand crank is not shown in the photo. 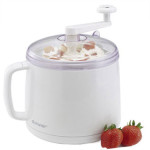 A Donvier™ is a device that utilizes a gel-filled liner that is chilled in your freezer, then inserted into an insulating bucket to keep it cold.  No ice or salt required. (Photo, left, from Cooking.com (2))

Refer to the Cuisipro website for more Donvier™ recipes (3), and Amazon for Donvier™ instruction manual (4).

See my 'About' page
View all posts by Cat →
This entry was posted in Dairy, Eggs, Frozen and tagged ice cream freezer. Bookmark the permalink.