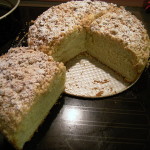 Tea cakes, a close cousin of American coffeecakes, are a specialty in the British Isles.  Many are flavored with spice mixtures brought back from India, where the spice blends are known as curries.

The simplest tea cakes resemble English muffins, but usually have some kind of dried fruit in them (such as currants).  Gingerbread cakes or scones can also be served for tea.

A true British or Irish tea is a mid-afternoon meal, and can be as simple as sandwiches, cakes or cookies and tea or coffee.  Or it can resemble an American dinner, with soup, salad, sandwiches or a hearty casserole, a roast (beef, lamb, chicken, etc), braised or baked vegetables, and of course a cake for dessert.

This spicy recipe is adapted from one by Mary Tuohy and included in the Irish Heritage Cookbook (1). The original uses white flour and does not include a pre-soak, but I prefer to include whole grain flour in my baked goodies. Pre-soaking the flour beginning the day before baking is important to release the minerals from the whole grain, so that they can be absorbed.

At the same time you are pre-soaking the flour, you also soak the raisins so they will be nice and plump. You will need to start both of these soaks the day before you plan to bake the cake.

The spice mixture in this recipe resembles Garam Masala, one of the most well-known curries from India.  You can mix them as written, using whole spices, or in a pinch (or if you don’t have a spice grinder), you could use all pre-ground spices; you’d have to play with the amounts.  I’d guess about:

in addition to the ground nutmeg and ginger as written.  Or you could use a commercial gram masala and add nutmeg & ginger.

8/3/08:  I didn’t have coriander seeds, so used 1 ½ tsp ground coriander.  All other spices as written; I used golden raisins.  Not enough liquid for soaking flour (original amounts of ¼ cup yogurt, ½ cup boiling water for 2 ½ cups flour); I kneaded it until I got all the flour incorporated, but it was very hard to do, and then very hard to mix in the soaked raisins the next day.  A bit too much batter for a 9″ pan. Next time: use only 2 cups water for soaking the raisins, and increase water for soaking the flour to 1 cup.  Either use a bigger pan, or reduce raisins to 2 ½ cups, whole grain flour to 2 ¼ cups and coconut flour to ¼ cup. These changes have been made to the recipe, in red text.