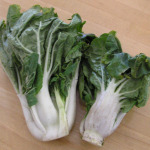 Cole slaw is a very common dish in my ancestral Scandinavian tradition, because cabbage is one the the few veggies that can be kept raw throughout the winter season. But there are ‘slaws’ traditional to other cultures as well, and this is a perfect example, combining the sweetness of fruit with the bitterness of cabbage. This pairs well with the jerk seasoning on the chicken.

One of the cooks at a local brew pub makes a delicious fruity slaw with cabbage, apples and a dressing flavored with poppy seeds, then pairs that with jerk chicken or pulled pork. It would not be difficult to adapt this recipe to resemble his “Apple Slaw.”

This recipe is adapted from Better Homes and Gardens, July 2010 issue (1). The original calls for pineapple, but I’m allergic to pineapple so I tried it with mango, and it was delicious!

While the original recipe calls for skinless & boneless chicken breasts, I prefer to start with whole breasts, then remove them from the bone after cooking. I leave the skin on because it adds flavor and is full of good things for your health. Cooks Illustrated (sorry, I don’t have the link) tested separating the breast halves before cooking, vs keeping them together; the latter method produced the best flavor and tenderness, and the skin remained crispy.

A recipe for making your own jerk seasoning is provided on my post: Curries & Blends. One of the ingredients, Scotch Bonnet peppers, are common in Caribbean cuisine, but can be difficult to find in the States; they are also the hottest of peppers. Reasonable substitutes would be habañero (the best substitute), Thai red chiles, jalapeño, or serrano peppers. You should wear gloves when you work with the hottest of peppers like Scotch Bonnet and habañero; and take great care to remove all the seeds.