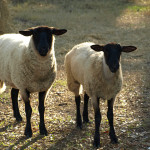 As a side dish, bulgur is very useful, and delicious when served with braised, sautéed (as in this recipe), or grilled lamb, or in making lamb kafta.

Bulgur (sprouted or roasted & cracked wheat grains), is a common ingredient in Mediterranean and Middle-Eastern cuisines. If you’re wheat-free or gluten-free, substitute quinoa or kasha (roasted or sprouted buckwheat) for the bulgur. If you sprout the quinoa, it will have a much shorter cooking time (and offer improved nutrition), so add to the veg, meat, broth mix toward the end of the 15-20 minute cooking time.

Another option is steamed couscous; couscous is a type of very tiny pasta made from semolina, that is very popular in Morocco – perhaps more so than bulgur.

This recipe is adapted from GroupRecipes, Lamb Lovers Moroccan Pilaf  (1). Lamb shoulder is an economical meat to use in this dish, but look for a cut that has only a round bone (or boneless), to make it easier to slice into strips. Leg of lamb is a better cut and also excellent.

For the lamb rub, it calls for ½ tsp “Greek-style seasoning” which could be just about anything with oregano, garlic and lemon zest. I found this  list on their site (2):

I compared this with a Moroccan seasoning recipe on Epicurious (3), and noted the only item in common is cinnamon:

For my first test I chose:

For a later test I chose a more Moroccan alternative:

Either way, this recipe is a quick favorite at my house. Serves 4 or more; I also include a 2-serving version

Note: amounts in parenthesis are for 2-servings, if different

Warning: don’t slice the lamb into strips until after rubbing on the spice mix (I learned this the hard way…)

4/18/07: made as written with leg-of-lamb steak, substituting cardamom instead of allspice, and I used a veggie broth that I made and froze a month ago. I ground my own black pepper and fennel, but used commercially ground cinnamon, nutmeg and cardamom. The flavoring on the meat is excellent, and the pilaf is also tasty. It needed more salt at the table, as well as a black and red pepper mix. Currants and almonds are an excellent garnish; however, I added the currants to the pilaf for about 5 minutes before serving, to soften them, and I think that’s a good idea.

7/23/07: Added 1/4 tsp dried oregano when I add the broth. Otherwise made as written, with bulgur. I used a very bony lamb shoulder, and was frustrated when cutting the meat into strips because the bones had odd shapes. And it was fairly fatty. Result: the oregano is a good addition, tho perhaps could use more. This shoulder was not as tender as for the previous test, and the final dish was fatty. I think I’ll stick to leg of lamb in future.

9/29/16: Couldn’t get leg-of-lamb steak so used 6 oz lamb round-bone shoulder steak for half-recipe. It didn’t make enough of the rub, so I sprinkled on some garlic powder, cinnamon, nutmeg and allspice before cooking. I updated recipe to use more garlic and spices. Forgot to thaw some chicken broth so used ½ tsp dried veggie broth in ¾ cup water, plus the spices for the broth, including oregano as per earlier testing. Otherwise made as written with 1½ cup dried bulgur and the currant/almond garnish. Result: Excellent. I’m so glad I added more spice to the meat. There’s enough pilaf left for another 6 oz lamb steak – Luckily, I bought a pair of them and set one aside for future. I served the lamb and pilaf with the almond/currant garnish, a steamed beetroot, and braised kale. Wonderful meal!

8/7/17: Made as written for half-recipe using 9 oz leg of lamb steak, veggie broth; garlic, allspice, coriander and cayenne for the Moroccan spice rub; and ginger, cinnamon, fennel and cloves in simmering mix.⅛ – ½ (⅛- ¼) Served with fresh, local green beans, and steamed beet; garnished pilaf with Zante currants and slivered almonds. Result: Delicious, and the small amount of heat from the cayenne really works well with the other spices. This version, like the Greek version, is a keeper!