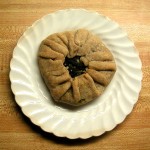 The spinach pies of Greece, Turkey, Lebanon and other Middle-Eastern countries are all a bit different from each other, but they all have the basic ingredients in common: spinach, feta cheese, and pine nuts inside a crust. Where they differ is in added ingredients, spices, herbs and the type of crust. This recipe is not as rich as the Greek recipe.

Nicholas Restaurant (4) in Portland Oregon (where I used to live), is a wonderful restaurant where I first has the Lebanese Spinach Pie. They shape their pie in a square (rather than a circle as in my photo above), and which is also my preference as it holds more filling per pie. However, the circle shape is easier to eat at a party.

This recipe is based on a recipe in Nourishing Traditions, by Sally Fallon. The Yogurt pie crust may sound a bit weird, but the flavor is perfect with the spinach seasoning.  For this recipe, use the Yogurt Crust version I for the best flavor – it is more tart (from more yogurt), and thus complements the spinach well. I’ve also used this crust for individual Mince Meat Pies during the holiday season (with real fermented meat), to rave reviews.

Yogurt pie crust is an example of using soaked grains, which, like sprouting, increases the bioavailability of the grain’s nutrients.  It can be made with wheat (or Kamut), or spelt. Spelt is a bit tricky because it is soluble in the liquid yogurt, making a softer dough unless you use more spelt, less liquid, or add some coconut flour to absorb excess moisture.

When I’m short on time, I buy Organic baby spinach, pre-washed and sold in clear container; two 5-oz containers (total 10 oz) will make about 3 cups wilted spinach (or one container for a half-recipe). Baby spinach stems are so tender and the leaves so small that you don’t need to tear them.

Although freshly grated nutmeg is best, packaged or bulk ground nutmeg will do (but you may need more).  If you don’t like nutmeg, try ground fennel seeds instead.

Scout out real Greek, Bulgarian or Romanian Feta for this recipe. These are usually made from sheep’s or goat’s milk.  It should be sold in blocks and kept in a salt brine.  American feta from cows milk just doesn’t have enough flavor.  If you can’t find good feta in a local store, it is usually available at igourmet.com (3) (type ‘feta’ in the search field, and you’ll get lots of choices).  I like their Dodoni Greek Feta.

I recommend presoaking, then toasting the pine nuts (aka crispy pine nuts) before adding to the pie mixture. I also recommend grinding them in a mortar after drying/roasting them, to make digestion easier.

This makes 8 – 10 individual pocket tarts.  I wrap extra baked tarts in natural waxed paper, then place on a washed meat tray, slide into a sealable bag, and freeze for later use.