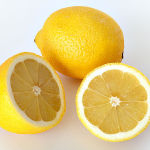 This is not a creamy pudding (like vanilla or tapioca), but rather more like a scuffle or steamed pudding. Nevertheless, it is delicious.

The original recipe called for 1 cup white sugar, but I prefer to use less sweetener, and substitute with less processed sweeteners, such as dried sugar cane juice (Rapadura), honey or maple syrup, and stevia, to reduce the sugar impact.  If you use white sugar, be sure it is white cane sugar, to avoid GMOs (from sugar beet sugar).

I have insulin resistance, so avoid sugar (even unrefined sugars like Rapadura, honey and maple syrup). I prefer to sweeten primarily with stevia, adding just a bit of honey or maple syrup for the flavor.Another option for me is xylitol, a sugar alcohol, but I like to keep that to a minimum too, because it may also cause insulin spiking.

When using stevia, you’ll get a better tasting product if you mix it with fruit before being adding to a recipe.  In this case, it is mixed with the lemon juice.

Rapadura sugar will give this dessert a tan color instead of lemony yellow.  Using less of it, or using a Rapadura/white cane sugar combination, will lessen the tan color.  Here are my sweetening options:

I do NOT recommend using Splenda, nor agave nectar; regarding these, see also my Sweet Cravings articles (pdf files) on The EssentiaList:

This recipe is adapted from the Daily InterLake newspaper, October 7, 2007.  In Britain, a pudding is not a custardy thing like Jello pudding, but rather a soft, creamy cake.  Or as in the case of this pudding, more like a soufflé.  Mmmm.  This recipe is similar to (but simpler than) Canary Steamed Pudding.

I’ve written this to use stevia and maple syrup, but you can try any of the sweetener options, above.

** Alternately, it might be possible to steam this pudding cake instead of baking it; refer to Steamed Puddings (About) for instructions.  Use 5 or 6 cup (48 oz) pudding mold; butter the inside well.  It could take as long as 1 ½ – 2 hours to cook by this method).  I’ve not tested steaming.

Testing 9/9/08:  made as written, with stevia and maple syrup.  Used raw milk.  Tasty, very light and souffle-like.  But I think it would be better with a granulated sugar, at least for part of the total sweetener.  Next time I’ll try ½ cup xylitol and ¼ tsp stevia instead of 2 Tbsp maple syrup and ⅜ tsp stevia.

See my 'About' page
View all posts by Cat →
This entry was posted in Baked, Berries, Citrus, Dairy, Eggs, Fat or oil, Flour, Nut Milk, Steamed, Sweetener. Bookmark the permalink.