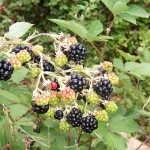 Clafoutis (a French word, pronounced “claw-foo-tee) is a simple, baked fruity custard pudding from France. The traditional baking method for a clafoutis is unique: 1) Pour part of the batter into the pan and bake in hot oven just until it begins to set, to form a thin “crust”; 2) Add the fruit and pour remaining batter over, then finish baking.

Because of the soft crust that forms on the bottom, clafoutis reminds me of a fruit kuchen. The version I present here is even more like a fruit kuchen, but instead of a wheat crust, it has a nutty crust made from almond meal flour and coconut flour. I include two versions:

This recipe is my adaptation of  Cherry or Blackberry Clafoutis (Baked Pudding), which in turn is adapted from The Vegetarian Epicure Book 2, by Anna Thomas (1), and French Food, about (2). Since first trying the Cherry Clafoutis, I’ve changed to a ketogenic eating plan (low carb, high fat), and had to give up flour and starches altogether for the first 6 months, and then could only add them back one day a week.

This method differs from a traditional clafoutis, in that the traditional method includes flour/starch in the custard, and bakes a thin layer of the custard at the bottom of the pan,  to form a “crust,” before adding the fruit and the rest of the custard. But I like the idea of a bit of nutty crust on the bottom (similar to a fruit kitchen), so decided to try an almond meal & coconut flour crust, with butter and small amount of sugar

About testing these recipe versions:

NOTE: testing for either option on ingredient amounts, are updated accordingly for both options. However, I have not updated Version 2 ingredients per Version 1 ingredients, as I plan to test that separately.

Option 1 has been tested in 2013 using 9×9 pan, and ingredients updated accordingly. Option 2 testing: started in Feb, 2002, using 6×8 pan. It is taking more than 1 test to get it just right; I have updated ingredients after each test, according to my findings. The major change is that the original crust versions make enough to go up sides of pan, but a clafoutis is only supposed to have a thin crust on the bottom (not up the sides), so updated and am testing accordingly.  Ingredient amounts are updated accordingly (for both options). Any adjusted ingredient amounts in red have yet to be tested.

I’ve not yet begin to test version 2 (fully-baked crust before adding fruit and custard, to bake again).

Testing 7/3-4/2013: This time I’m using a 9″x9″ square baking pan, with thin bottom crust of almond meal and coconut flour. I buttered the bottom and sides of the pan, then pressed the crust into bottom and about ¼” up the sides of the pan, but I think it is too thick. I’ll make a little less, next time. I forgot to add the stevia to the custard, so this won’t be very sweet. Also decided to skip the melted butter in the custard. The custard and fruit rose above the low edge of crust. Baked at 425° for 18 min – a bit longer than original recipe, so the nutty crust would toast a bit, then added the custard mixture and baked at 325° for 40 min. Not quite done so baked 5 minutes more. Result: I don’t miss the stevia in the custard – there is plenty of sweet from the sweet dairy whey. This is very good. But next time I’d like to try pre-baking the crust (without fruit) and let it chill before adding fruit  and custard. I would add the cinnamon mixture to the custard rather than sprinkling on the fruit, since the fruit won’t get a pre-bake.

2/15/20 test: Prepared crust for 6×8 pan: Used ¾ cup blanched almond meal flour and ½ cup coconut flour, 2 tsp coconut palm sugar, pinch salt, 5 Tbsp butter (plus about ½ Tbsp to butter pan), and 2 Tbsp filtered water. Pressed into 6×8 pan bottom and up sides about 1½ inch. Baked at 425°F for 15 min, then removed (6 PM). The top of the sides were lightly browned; the rest not browned, but crisp; did not put back in oven because didn’t want the tops to burn. Rested on counter to cool. Lowered oven to 325°F. Arranged fruit over pre-baked crust (used approx 12-oz of mixed fruits: mango pieces and strawberries (both cut to about the size of a raspberry), blackberries, raspberries, and blueberries; combined 1 tsp cinnamon, 1 tsp sweet dairy whey, and ⅛ tsp stevia powder and sprinkled over fruit. Prepared custard using 2-lg, 1-sm eggs, 1 cup milk, ½ cup cream (this turned out to be too much as I had custard left over), 1 tsp vanilla, 2½ tsp coconut palm sugar, and 2 tsp sweet dairy whey (skipped liquid stevia and melted butter). Didn’t add melted butter. Poured over seasoned fruit; however, there was about ½ cup extra which I baked in a small, buttered custard cup (set in a pan with water about halfway up), along with the clafoutis. Bake: into 325°F oven at 8:50 PM; checked at 9:07, 9:25, 9:30 PM – small custard is done so removed to cooling rack; but clafoutis is still liquid in center. Raised oven temp to 350F. Checked again at 9:40 PM – done near crust but still liquid in center; checked oven thermometer – 350 right on. Checked again at 10 PM; done! so removed to rack to cool. 70- min total baking time for clafoutis. Result:Leftover custard needed more sweetener, perhaps 1/16 tsp stevia (2 Tbsp sugar equivalent). Clafoutis is nicely flavorful and textured, but could also use more sweetener. Oh darn! I forgot that Clafoutis have only a thin crust on bottom, not up sides of pan. What I made is more like a Kuchen! will test again with updated crust ingredients and sweetener amounts (see updated Ingredients, above).

2/28/20: Made as before except used ingredient amounts for crust: 5 T blanched almond meal flour, 4½ T coconut flour, 2 tsp coconut palm sugar, pinch salt, 4½ T cold butter and 2½ tsp cold water. Pressed onto bottom of buttered pan and slightly up sides (about ¼″). Into 425° oven at 10:30 AM. Fruit: mix of blueberries, raspberries, Marion berries, and cut-up mango sprinkled with stevia/cinnamon mix. Custard: used 1 large egg plus extra yolk, 7 T milk plus 2½ T heavy cream, 1 tsp vanilla, 3 drops liquid stevia, 1 tsp SDWhey, 2 tsp coconut sugar and ½ Tbsp melted butter. Poured over seasoned berries and into 325° oven at 11:25 AM (oops, forgot I upped desired temp to 350°). Checked at 11:55; not quite done. Checked again at 12:05 PM (total 40 min); needs a few min more. Out of oven at 12:10 PM (total 45 min). Let cool before tasting. Result: Crust is too thick, tho delicious that way. Nicely sweet (probably not sweet enough for some people, but perhaps a tad too sweet for me). Next time I’ll reduce amount of sweet dairy whey in cinnamon mix, or liquid stevia in custard. In retrospect, I think it didn’t need that last extra 5 minutes in the oven. The custard could have used another Tbsp of heavy cream; I’ve updated the ingredient amount accordingly. I don’t think adding the butter made any difference. Next time: I’ll test making thinner crust, adding more cream to custard, and mixing the cinnamon mix into the custard rather than sprinkling over fruit, for more even throughout the dessert. I’ve updated recipe accordingly.

The crust for this version uses less crust, so it is not as thick as version 1 and only covers  the bottom of the pan – not the sides). I pre-bake and then chill it before adding the fruit, more like the original clafoutis. If you use the stevia in the custard, use less sugar or sweet dairy whey.

Note that I’ve not yet tested this version. Also not sure which size pan this was for (written in 2013), but I think it’s 9×9 pan.

I have not yet tested this version