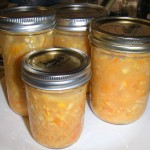 Fermentation is an ancient process that goes back to early Biblical times. It preserves and augments the nutritional elements of the preserved food. Fermented marmalade may have originated in Colonial India, where, like other condiments such as sauerkraut, kimche, pickles, ketchup (catsup), and chutneys were preserved by fermenting with lactic acid.

Unfortunately, in modern times, these condiments are preserved by canning with vinegar (acetic acid). Unfortunately, the heat/pressure of canning destroys or at best minimizes the nutritional elements of the canned food.

It is recommended to eat 1 – 2 bits of fermented food daily, for a healthy gut. After testing both recipes, I prefer Fermented Orange or Other Citrus, and found the Marmalade version (below) to be too much work.

Marmalade is sweeter and thicker than the simple fermented orange, and is used like a jam. My recipe uses less sweetener – is more bitter and tart – for use in my morning smoothie or as a daily fermented food. It’s also a bit more work because you have to cook the pectin and fruit for it to thicken properly.

This recipe is adapted from several recipes (see “development of my recipe,” below). I make up a 2-quart batch and set them to ferment and store in narrow-mouth pint jars (the narrow-mouth exposes a smaller surface to the air, for better storage life. See also pdf version of the version of the recipe using pectin, with photos, on the ESP website: Lacto-Fermented Orange Marmalade.

Hint: If you find you use more lemon or orange juice than rind in your baked goods, save the rind (cut into thin strips) and add to the cooked rind mixture of your marmalade.

9/5/11 (photos from testing): Made full recipe as indicated, with the following changes: Used ½ cup water for the cooking portion, with 2 tsp Real (Redmond) salt (fine crystals) and 1 tsp no-sugar pectin; added ½ tsp powdered ginger to the raw portion, with ⅓ cup honey. The cooked portion got quite thick but mixed easily with the raw portion, then cooled in about 30 minutes to 104° F. After mixing cooked and raw, I gave it a taste: not too salty, quite bitter but a little sweet too. Can hardly wait to taste it after fermenting!

Filled 3 sterilized pints (one only ¾ full), and 1 half pint sterilized jars (total 3.25 pints). Topped of with a little bit of filtered water (about 1 Tbsp per jar) to cover, but left about ¾” air space above. Into fridge for overnight on 9/5. Then back to counter to ferment on 9/6. Checked flavor on 9/9 – it needed another day. On 9/10 I put it into the fridge and then today, 9/12 (my Birthday) I gave it another taste.

Result: Mmmmm. It has a slight alcohol fizz and a tad taste of salt but then the bittersweet orange peel kicks in. Not too liquidy. This is a keeper! but has different texture It will benefit from fermenting slowly in cold storage – mellowing – and losing the saltiness. After a few weeks in the fridge, it mellowed quite a bit, with no remaining taste of salt, and enhanced sweetness. I just love this in my smoothies! But the texture is not so good for spreading on toast. I can hardly wait to try it as a topping on vanilla or pecan ice cream.

However, it does not have a spreadable texture like canned marmalade. If you want that, you would need to cook the peel to soften.

Development of my marmalade recipe

I started with the simple recipe on Nourishing Traditions  (1) [see  Natural Health and Prevention (2) for that recipe online) with the following ingredients:

But it is a bit too liquidy for my taste, as I wanted a recipe that produces a thicker end product. Pectin would help, but it must be boiled with the fruit which I prefer not to do, so I did a test batch with boiling it, then cooling before adding the peel. (see “Testing” below the recipe).

About the fruit: It’s very important to use Organic, or Organically grown, to avoid the pesticides sprayed on the peel; no matter how hard you scrub, you cannot remove all of it.

About the peel: The citrus peel is comprised of two parts: the zest (colorful) which is rich in flavor, and the pith (white) which is quite bitter (and full of nutrients including pectin). If you don’t like the bitter, use a veggie peeler to remove the zest from the fruit for the recipe, then slice the zest into thin strips. Peel off the pith from the juicy fruit and compost it. However, you will need to add more pectin to replace that lost when the pith is removed.

Pectin allows the marmalade to thicken with time, as well as providing nutritional benefits (including: soluble fiber, healthy level of cholesterol, protect against colon cancer, stabilize blood sugar (6); prevent heavy metal poisoning, specifically lead & strontium (7); anti-inflammatory – reduces production of pro-inflammatory antibodies, and helps to lower stress (8). Most commercial pectin contains a fair amount of sugar, but it is available in “low” or “no-sugar” versions. If you use regular pectin, you will want to reduce the added honey or other sweetener in your recipe.

To activate the pectin, it needs to be cooked with the fruit, but before you add the cooked fruit to the raw fruit, you want to cool it below 40°C (104°F), as any higher temperature will destroy the important enzymes in the raw fruit. Cooking the peel also helps to soften the peel to a better texture.

Pick Your Own‘s page on pectin (4) indicates that all citrus fruits have enough of their own pectin in the white part of the peel to form a gel; if you eliminate the white part to avoid the bitter flavor, you will need to add pectin to the fruit, then cook the mix to activate the pectin. I recommend “low” or “no-sugar” pectin to minimize the added sugar in the recipe. (If you use regular pectin (with added sugar), you may need to use more). Their recipe for marmalade (3) suggests using up to 30% more pectin than recommended on the box for standard (canned) marmalade.

Rejoice In Life’s recipe for Ginger-Citrus Marmalade (5) uses both honey and pectin; I’ve borrowed this for the base of my recipe.

One half to three-quarters of the raw peel is simmered in water to soften the rind and activate the pectin. I initially used 1/4 cup of water for the simmer, but increased that to 1/2 cup. After testing two different batches, I think a larger percentage of the peel should be simmered. I’ve adjusted recipe accordingly. After cooking to activate the pectin, the citrus/pectin mix is added to the raw peel and pulp.

Ginger: This herb has important health benefits as well as flavor. I recommend using Organic fresh ginger-root which is added to the raw mix. Powdered ginger will also work.

Honey: Don’t be concerned that honey’s natural antibiotics would inhibit the fermenting action of the lacto-bacteria; the antibiotics in honey act on ‘bad’ bacteria, not the good lacto-bacteria. However, if you are still concerned you could use Rapadura or Sucanat, but being brown, it would give the marmalade a darker color. Originally I started with only 1/4 cup honey, but increased it to 1/2 cup after testing (I used no-sugar pectin).

For those who are avoiding sugar, such as for a ketogenic diet, most of the sugar in the honey is converted to lactic acid by the fermenting bacteria.

Salt: For roughly the same amount of fruit, Nourishing Traditions uses 1 Tbsp unrefined sea salt, whereas Rejoice In Life uses only 1/4 tsp. My inclination is to increase the amount of salt to at least 1 tsp, to ensure the fermentation is not contaminated by bad bugs.

Starter Culture: While it is an optional ingredient for fermenting veggies (cabbage, etc.), it is a must when fermenting fruits like mango, papaya, peaches, apples and even cucumbers (yes, that’s a fruit, technically).

Liquid whey is added as an inoculant of lacto-fermenting bugs and lactic acid, to jump start the fermenting process and ensure a mold-free product. As an alternative, you can use a commercial powdered starter culture, or fermented liquid from a previous batch, or from another fermentation.

For subsequent batches, you can use liquid from the previous batch as the starter culture.

Pick Your Own (3) recommends gently turning the fermentation jar a few times a day to make sure the citrus at the top is getting washed in the culturing fluid.  If you like things a bit sweeter, add some extra honey or other sweetener, once the citrus is done fermenting.