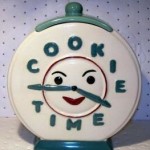 I’m busy transferring all my recipes to my new recipe blog, and just finished two varieties of ‘healthful’ oatmeal cookies (they include added fiber in the form of date sugar or flaxseeds, to lower the glycemic value), and got a hankering for the oatmeal cookies I remember from my childhood. I won’t make them now because I’ve learned I have a food sensitivity to oats, but just capturing the recipe will satisfy that longing.

The first recipe is the one Mom made; the second is the recipe I used when I was first on my own. They have their differences which I find interesting:

I like aspects of both recipes: including ground apple (with peel) as in the first recipe helps the cookies to remain moist after baking, but I’m not sure why the raisins and nuts are also ground. I would probably just chop the apple and nuts fairly fine and leave the raisins whole. I might plump them a bit in water or brandy, overnight, before using the recipe.

In the second recipe, I like the use of buttermilk or sour milk (or you could use plain unsweetened yogurt), as it too helps the cookies to remain moist after baking. It could also be used to presoak the whole grain flour of my adaptation, if desired.

Maybe one of these days I’ll merge these two recipes into one, but the big decision will be which to use more of: oats, or whole grain flour.

This recipe is adapted from the recipe my Mom used when I was growing up, which is from Home Baking Made Easy, by Virginia Roberts copyright 1944 (see Beloved Cookbooks for more info). I have not changed much, and include the original ingredients in parenthesis, where I’ve made changes.

This recipe is adapted from Better Homes and Gardens NEW Cook Book, published 1976 (see Beloved Cookbooks for more info).  I have not changed much, and include the original ingredients in parenthesis, where I’ve made changes.

If you wish to presoak the whole grain flour overnight, stir the buttermilk into the flour in a small bowl. If this mixture is too liquidy, add some of the oatmeal until it is thick but still stirrable. Press waxed paper against the surface of the dough, cover with towel or place bowl in a plastic bag, and let rest on counter overnight.