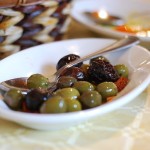 Tonight (Jan 3, 2016), CBS News: 60 Minutes had a segment on the Mafia’s involvement in every aspect of the food business – including olive oil from harvest to table – and what young Italian olive growers are doing about it. One of those interviewed asserted 75 -80% of the olive oil sold in America, is fake or at best diluted. You can view the segment on 60 Minutes Overtime (9) or see below.

Nov 2021: I recently learned that many avocado oils are similarly fake or diluted. Buyer beware!

Read on for the video and my original article from 2 years ago.

You can view the video on the CBS website; see reference (9) at bottom of page. 7/6/18 update: That video is no longer available, but reference (9) does have text.

Olive oil has become very popular in recent years, and not just in the kitchen; it can also be used as a skin moisturizer. It is great for salad dressings and marinades, and for medium-low heat cooking, such as sautéing or braising. However, it should not be used for higher heat cooking, such as browning meats or deep frying.

Inevitably, now that it is so popular, some companies [from the 60 Minutes piece, above, we know the Mafia is behind this] have found a way to increase their profits from the sale of olive oil by – gasp! – diluting it with cheaper seed oils such as corn, soy or canola oil (which may be GMO).

If you test your olive oil using the at-home tests described below, let me know what you find and I’ll add it to this article.

Testing for Purity of Olive Oil

Back in 2010, UC Davis  published information about adulterated olive oil (2). They  tested 124 different samples from eight major brands (6,7), both domestic and imported, and found that 69% of imported, and 10% of domestic (California-based) oils labeled as olive oil or extra virgin olive oil, did not meet international and USDA standards.

Beginning in 2011, Duke University publishes information on adulterated olive oil; those results can be found on FoodFraud.org (1); on their site, click the Search tab, and type ‘Olive oil’ in the search field to get the results. Duke  researchers used DNA analysis, as well as other methods to identify the plant sources of oils in the mix. What did they find? corn, soy, safflower, canola and other inexpensive oils, most of which are likely GMO (1, 2), some with green coloring added to look like olive oil. .

How can you tell if the olive oil you use is pure?

You can send a sample of your oil to UC Davis Olive Center (4) for testing. But short of that, here are some general indicators:

These tests are by no means infallible, but it’s a good place to start. For the most definitive test, send a sample of your oil to UC Davis Olive Center (4) for testing.

Put your bottle of oil in the refrigerator overnight. After chilling, inspect the oil: (5)

*Note that some pure olive oils are winterized (chilled and filtered) and will fail the fridge test, even though they are pure. It would thicken but not solidify so the test would be indeterminate. (6)

If your oil passed the fridge test (it solidified), next do the taste test (5). “Good olive oil is often bitter, pungent, spicy, and slightly abrasive. It’s not always smooth and easy going. In fact, the “off-notes,” the intense flavors that make the uninitiated screw up their face, actually indicate the presence of high levels of polyphenols” (those peppery compounds that make olive oil so healthful). (6). If your oil burns the back of your throat or tastes “funny,” it is probably pure olive oil.

However, olive extracts and polyphenols can be added to adulterated oils, and those pass the taste test even though they are not pure olive oil.

However, there are other oils besides olive oil that will burn in an oil lamp, so this test is not definitive. (6)

These lists are based on testing at UC Davis in 2010. Most likely those found to be adulterated are still adulterated, but some of the ‘pure’ brands may no longer be so reliable.

The following brands that failed to meet international and USDA standards for pure olive oil and are likely adulterated ( 2):

The following brands met the standards back in the 2010 study ( 2):

I’ve been using Western Family brand of imported olive oil for a couple years, because it has a good price. But when I learned of this adulteration problem, I became suspicious. I put some of the oil in the fridge for 3 days and it never solidified. A very bad sign. I didn’t even bother to do the taste test because the fridge test was fairly definitive. Also it comes in a clear bottle, another bad sign. (Authentic olive oil is sensitive to sunlight, so is sold in dark, colored bottles or in cans).

Next I bought a dark-colored bottle of Spectrum brand Organic Mediterranean Extra Virgin Olive Oil, from Spain or Tunisia (per the label). It was slightly cloudy at room temperature, and started to solidify after only 1 hour in the refrigerator. It was mostly solidified by the next day. Then I tasted it, and noted its peppery flavor. This oil cost twice as much as the Western Family olive oil, but I want the real deal. I’m not 100% sure it’s is pure, but I’m going to trust it.

I have also tried a bottle of olive oil from a named orchard in California, another trustworthy sign. It came in a dark bottle that was corked, like wine. slightly cloudy at room temperature and easily solidified in the fridge. Also had a nice ‘green olive’ flavor, slightly peppery. It is more expensive than the Spectrum Organic olive oil, so I buy it only when the store is out of Spectrum.

A friend had a different brand of Organic olive oil she bought at Costco, so she did the fridge test. It did not solidify at all, so may well be adulterated; or it may be pure but ”winterized’. (6)

Another friend, who lives in Israel, tells me that the big Italian brands [like Bertolli] are most suspect while middle-eastern brands are more trustworthy.