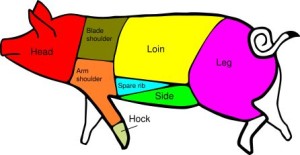 When I was a kid, pork chops were my favorite treat (well, after Lutefisk). Several of the local farmers raised hogs; we usually bought two each year. Mom had been a meat-cutter before she married Dad, so she always cut up the butchered hog, and made bacon from the belly cuts.

I first got this recipe from a women’s magazine in the 1970s, when I was learning how to cook.  It became an instant favorite. The flavor of the pork and cream sauce together is wonderful. I no longer eat much pork, perhaps only 3 or 4 times a year, so it’s a real treat.

The recipe is written for one pork chop (one serving); simply multiply quantities by the number of chops you want to prepare.  I prefer pork chops with the bone, for the gelatin and minerals from the bone, but you could use boneless, about 6 oz meat per serving.

Now that I know about brining, I like to brine my chops first, with mustard seed and maple syrup (See Brining Pork for instructions and information), because today’s pork has low moisture and can be quite dry after cooking.

About sour cream: It’s always healthiest to make your own from raw cream. The next best alternative is Daisy-brand sour cream because they don’t add any starches or other additives – their only ingredient is “cultured cream.” (1)

I use an older-style Corningware pan that can be used on stove top and oven, the kind with the cornflower design, a removable handle, and glass lid, because I can serve the chops in the same pan.  But you could use a heavy dutch oven (such as Le Cruset) or cast iron skillet with lid.

If you love this dish but don’t want to heat up your kitchen in the summer, you can also make this in your skillet on stove-top. See Stove-Top Method, below.

If you love this dish but don’t want to heat up your kitchen in the summer, you can also make this in your skillet on stove-top.

Testing 3/23/20 (as I’m self-isolating from the coronavirus): I have made this dish many many times, using super-market pork that was not raised locally; but when I made it tonite using pork raised by a local 4H member), this batch was different. I used one 8-oz bone-in pork chop about ½-inch thick, and followed recipe as written. However, there was a lot more fat in the pan after searing the chop that usual, but I decided not to pour some of it off. When the chop was done roasting in the oven and I removed it from the pan to make the sauce, the liquids in the pan had increased even more – both fat and water. When I added the sour cream, it tended to separate from the liquids rather than mixing in. So I added a scant half-teaspoon tapioca starch and whisked it in. It helped the mix to thicken, while at the same time, taking-up the excess fat – a good addition, indeed! I will update recipe accordingly. Result: Very delicious, especially the sauce.