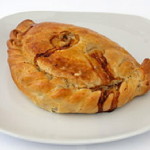 When I was 13, a family from Butte Montana, moved to my neighborhood. They had a daughter my age, Lindy, and we became friends. One day when we were playing at her house, Lindy’s Mom was making pasties and invited me to dinner. I’d never heard of these but I watched her rolling out pie crust so figured they must be good. Then I saw what was in the filling – meat and potatoes! I’d never heard of such a thing, and my childish stomach turned over at the thought of meat in a pie.

“No thankyou,” I said. “Dad is expecting me to dinner at home.” But Lindy raved over her Mom’s pasties and explained they are a mining tradition, well loved in Butte. So the next time her Mom made pasties, I decided to give them a try – one tiny bite at a time. The buttery crust was so tasty and the filling was as good as Dad’s stew – maybe better (but I’d never tell him that).

The other day I was going through my cookbook collection, to thin it out and make room for the ones I brought from Portland storage, and came across a pasty recipe. I’ll definitely have to try making them, tho I doubt I could ever duplicate those rich, delicate sauces from Kells or the flaky pastry of Lindy’s Mom.

To get a visual idea of how to make pasties, here’s a pictorial recipe: Upper-Peninsula-Now.com (2). Unfortunately, they use ground meat instead of cubed meat.

In Portland, there’s an Irish restaurant called Kell’s (1) that opened not far from my office, so I went there some times for lunch.  Every day they had a special pasty on the menu so of course I had to give them a try – delicious! Here’s the list of pasties currently on their Seattle menu, to give you some ideas:

This is basically a simple pie crust: flour, butter or lard, salt and water, with optional celery seed added for flavor. So if you have a favorite pie crust recipe, you could use that – but don’t add any sugar.

Consider my Yogurt Pie Crust I or II (because they go well with savory fillings, and the yogurt pre-soak improves their nutritional value).

The following recipe is adapted from Joy of Eating Natural Foods, by Agnes Toms, reprinted 1971 and Michigan Tech Humanities Department (4). See also their article: Cultural Context of the Pasty (4).

For the flour, I recommend using unbleached white flour the first time you make these. Then try using half whole grain, half white. Or try one of my Yogurt presoak versions (see link above).

This recipe is adapted from Michigan Tech (4) and All Recipes.com (5), and makes 6 pasties. If you only want 4 pasties, use ½ pound of meat, 1 cup diced potato, 1 small turnip (diced), ¾ cup minced onion, and 1 small cooked carrot, sliced.

Round steak is not recommended for this recipe because it is too dry. But just about any other cut can be used. Pork shoulder steak can also be used, mixed with beef. A mix of ground beef and pork can also be used, but brown it lightly in butter before mixing with the veggies.

In my research of recipes, the baking instructions vary greatly, so do feel free to experiment. Here are some options:

This version is from Michigan Tech (4).

This Cornish version is from All Recipes.com (5).