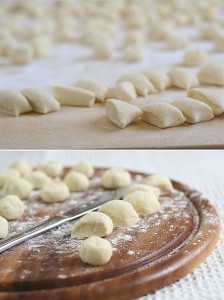 Gnocchi are a cross between pasta and dumpling. Perhaps the best known are potato gnocchi, but they can be made from a variety of ingredients, including semolina, wheat flour, or bread crumbs.  Also ricotta, with or without spinach, which is probably one of the original versions.  The people around the Mediterranean were making gnocchi for centuries before the introduction of potatoes from the new world.  Semolina or ricotta gnocchi were very common.

I feel a special affinity for potato gnocchi because they are related to one of my favorite foods:  Lefse – Potato Flatbread from Scandinavia.  Well, OK, lefse is cooked on a grill and gnocchi are boiled in water or milk, but the basic dough is very similar.

Gnocchi is pronounced correctly as nyoh’-kee, but commonly mispronounced as nyah’-kee or noh’-kee; the ny sound is similar to ñ in Spanish. (You can listen to the pronunciation at howjsay.com (1)).  An alternate spelling is ‘ñoqui’. Wikipedia (5) suggests the word means ‘lump’ and is derived from the Italian gnocchio (knot in wood), or nocca (knuckle)

1. After forming the dough into a snake (or rope) about ¾” thick, and cutting it into 1″ pieces, you need to give the surface some texture so that your sauce will stick to them.  This is done in either of two ways:

2. After forming the gnocchi, you can use them right away, refrigerate (covered) for later use in same day, or freeze for storage.  Frozen gnocchi can be cooked without thawing first.
3. Cooking the gnocchi is done in lightly boiling water, and at the last minute, before serving.  You do not want a roiling boil, because it will cause them to break apart.  Just a gentle boil.  They will sink to the bottom when you first add them, then float to the top when done.  Remove with slotted spoon.

You can see that these recipes, which serve 4 as a main course, or 6 – 8 as a first course, are not consistent, which is typical.

I have not yet experimented, so do not have a recipe to offer.

I’ve not yet made potato gnocchi, because I can now find them ready made at my locally-owned grocery. Let me know what works best for you!

I had lost my recipe for this.  I remembered it as being very simple, so I tried the following (reduced proportionately to serve 1); see testing below. See also a recipe from Rogue Creamery, below.

Serves 4 as a main course.

I made up a batch for 1 serving as follows: 2 very thin cross-wise slices of red onion, then cut into quarters; 3 cloves garlic,  1 Tbsp butter, ¼ cup heavy cream and 2 oz gorgonzola, crumbled.  Using cast iron skillet, I sauteed onion and garlic in butter over very low heat (using simmer plate) until garlic softened.  Then added cream and brought it to a boil.  Stirred in cheese a bit at a time until melted.  Adjusted seasoning with pepper. Cooked gnocchi in boiling water with freshly shelled peas, then spooned sauce over drained gnocchi/peas.  Result:  excellent.

This recipe, adapted from one by Oregon’s Rogue Creamery (and published in our local Daily Inter Lake newspaper) does not have a creamy sauce; rather the cheese is broken into chunks and tossed with the gnocchi. I’ve not tried it yet.

You can use potato or other gnocchi (but I far prefer potato). You can use an y blue cheese but I prefer gorgonzola or blue-brie. My Mom would have preferred Danish blue…