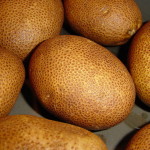 My Dad used to make potato pancakes, especially for late night suppers. I loved these, but didn’t learn about latkes until I was in my 20s and on my own in Portland OR. They are so easy to make, I’m surprised I don’t make them more often.

This recipe is adapted from one on Fine Cooking, originally by Layla Schlack (1). This version seems to be more authentic than the following version (with leeks) in the way the potatoes are prepared before cooking. See How to Make Latkes (2) for photo essay on the method. Using the starch from the uncooked potatoes binds the latkes better than using flour, bread crumbs or matzoh, according to the author.

However, it also calls for ‘vegetable oil’ which is not good for high-heat frying; instead, I would use lard, but a person following Jewish dietary laws might use suet or olive oil instead (although olive oil is not the best choice for medium-high heat). Another option would be to use ghee (clarified butter). See Good Fats for Cooking, for more.

I’ve adapted this recipe from the December 23, 2009 issue of the Daily InterLake (originally by Bonnie S Benwick in the Washington Post (3)). The original recipe includes ground beef in the latke, which I have eliminated as I think the flavor of the beef would overwhelm the delicate flavor of leeks and potatoes.

In the original recipe, you need a food processor to process the potatoes and leeks. I don’t have one, so I’ve modified accordingly.

The oil used for frying the latkes must be quite hot; olive oil cannot withstand that amount of heat. Lard or palm oil are both good for this high-heat, as is coconut oil. Clarified butter (ghee) is another option. See Good Fats for Cooking, for more.