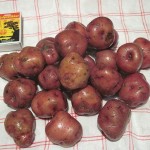 Gratin is a very old dish, dating before the time when potatoes were introduced to Europe. In America, we are most familiar with potatoes in this dish. It makes a great presentation for holidays or dinner guests. In French, this is called Gratin de Pommes de Terre.

I highly recommend using a mandoline (not mandolin, the stringed instrument) to slice turnips or potatoes (equally good for most other veggies as well). It is very difficult to slice as thin as needed, with a knife. I use my Mom’s stainless steel slicer from the ‘50s, just like the one in the photo, left (from Lehmans (6)). It is very efficient – just watch your fingers near the slicing edge.

This dish is quick and easy to put together, before baking in a slow oven for an hour or more (depending on size of recipe).

If you are unfamiliar, a waxy potato is a boiling potato such as Red Norland, fingerling, or new potatoes.  Yukon golds are a bit more starchy, but can be used in a pinch. Do not use russets (baking potatoes) because they are too starchy.

Another delicious option is to use half potatoes, half turnips (see also Turnips au Gratin); it’s a great way to introduce kids to turnips, as it is hard to tell them from the potatoes in the combination.

Many people use a combination of milk and cream to make potatoes au gratin, but I think the result is much better if you use only cream. For one thing, the milk tends to curdle (separate into cords and whey) as it approaches a boil.

The Suite101 recipe (1) calls for double cream, which is available in Great Britain, but not in the US. This is richer (42% fat) than heavy or whipping cream (36% fat) available in the US. Child uses a 50-50 mix of heavy cream and half-and-half. See cooking tips .net (7) or ocher .com (8) for other reasonable substitutes. After testing and reviewing other recipes for this dish, I’ve concluded that using a combination of cream and sour cream (or Crème Fraiche) is the best option: about ⅔ cream and ⅓ sour cream. Julia

I far prefer Swiss Gruyere to regular Swiss, Romano or Parmesan cheese for this dish. And cheddar just doesn’t have the right flavor.

This is a delicious au-gratin dish from France. I provide two ways to prepare this dish. The first is adapted from Suite101 .com (1); the second is from Julia Child’s Way to Cook recipe (2).  Other Potato Dauphinoise recipes that influenced my adaptation of the original Suite101.com recipe: Mastering the Art of French Cooking recipe (3), Food.com 5-star recipe (4), and Simca’s Cuisine recipe (5).

A Le Creuset au Gratin dish is ideal for baking this recipe, but a Pyrex glass baking dish, pie , quiche or cake pan will also work. When I’m making this just for me (half recipe), I use my 7 ½” ceramic pie pan.

Serves 6.  Unused servings can be refrigerated, but this dish is best eaten right after baking. Ingredients for half recipe (3 – 4 servings) is also provided.

* I don’t recommend using milk, as it could curdle at a boil; I prefer 1 cup fresh, thick cream and ½ cup sour cream cooked together.

This version is adapted from Julia Child’s Way to Cook recipe. I suggest using a double boiler (with water in the lower chamber) to reduce the chances of curdling the cream.

Testing 12/9/11: Made half recipe using 1 lb red potatoes, 3/4 cup sour cream, 1 clove garlic, 2 sprigs thyme, pinch nutmeg and 1 oz grated gruyere. Prepared cream and layered per  first set of instructions. Baked at 275° for about 65 minutes, then increased to 375° for 7 minutes to brown. Removed from oven and let stand before serving. Result: quite tasty but I don’t think there was quite enough cream. Also sour cream is a bit too thick and had to manually spread over potatoes; regular cream (or half sour cream, half regular) would be better.

Testing 3/24/12: Again, made half recipe but this time used 1 lb yellow Finn potatoes, 1/2 cup thick cream and 1/4 cup sour cream and 2 small cloves of garlic, halved. Also 1/2 shallot, 2 sprigs thyme, pinch nutmeg and 1 oz grated gruyere. Prepared cream as instructed, including straining out the cooked shallots and garlic; however I did press it through the strainer as much as possible. Baked at 275 for about 30 minutes, then at 300 for another 25 minutes, total 55 minutes in oven. Result: It was nicely browned, but the potatoes could have been cooked a little longer. The cream was thickened by the potato starch and it was delicious!

Testing 5/8/17: Made half recipe using red potatoes, and 1 large clove of garlic, roughly sliced, and 1 shallot, sliced. After straining the cream, I reserved the garlic and onion to sprinkle over the first layer of potatoes before adding half the cheese and cream. Baked at 275 for  60 minutes, then covered pan with a tent of foil to protect it when I raised the oven to 350 for baking chicken. I removed the potatoes after another 15 minutes, to keep warm, covered, on top of the warm stove while the chicken finished baking. This worked well and the potatoes were perfectly golden. Delicious! I really like the addition of the garlic/shallot.

I like the first method so well that I have not been tempted to try the second one – yet.