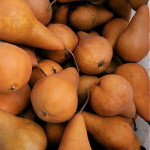 There is nothing like a fruit crisp as dessert, any time of the year; simply use whatever fruit is in season:  apples, pears, peaches, nectarines, berries, or even a combination of these.  I don’t like my crisp too sweet, as the sweetness takes away from the pleasant tartness of the fruit.

The herbs in this recipe add a wonderful flavor to the fruit, but the use of herbs in sweet treats is not as common in the US as in Europe.

This recipe is adapted from the Daily InterLake, October 31, 2007, originally from the LA Times by Betty Hallock and Donna Deane (1).  The original recipe includes the herbs and ginger, but of course, the crisp can be made without them. If you want a more traditional crisp, add 1 tsp cinnamon (plus 1/4 tsp nutmeg, if desired) to the apples when you add the flour and sugar, and omit the herbs and ginger in the topping.

I prefer to leave the peel on my pears, as the peel contains vital nutrients, and also helps the pears to hold their shape when baked.  But you can peel them if you choose.

The original authors of the recipe write:  “Like lemon zest or ginger used in baking, rosemary and thyme focus the elements in fruit that aren’t sweet while tempering the sugars.  But the two herbs add their own pungent, piney nuances.”  I would not recommend using both herbs in the same batch of crisp.

This version does not use a presoaked crumble, but you can use the Yogurt-Spelt Crumble instead, using 2 Tbsp chopped fresh rosemary or thyme, and ½ tsp ground ginger instead of cinnamon and nutmeg.