Salt was at one time considered so valuable, it was used as money!  That salt was not the common table salt used today, but rather the mineral-rich unprocessed sea salts of lore.

All salt is made either by mining rock salt (which was made from the sea, eons before the seas moved and buried the rock salt beneath the surface of earth), or by concentrating and drying sea water. However, the similarity between table salt and unrefined sea salt ends there.

Salt is much maligned today, both in the media and by the allopathic health profession. High blood pressure is rampant in our western society, and this problem is blamed on salt.  While this may be at least partially true of ordinary table salt, it is not true for unrefined sea salt. Additionally, over-consumption of sugars is also implicated in many of the health issues commonly blamed on salt.

Both refined and unrefined salt are comprised mainly of sodium chloride; it’s the other components that make all the difference for your health.

Sodium chloride – while important for life because it regulates fluid balance in the body as its major job – is also responsible for salt’s effect on blood pressure, and may play a role in heart disease and stroke. Since both refined and unrefined salt are primarily sodium chloride, one would expect both to have the same negative effect on health. But one would be wrong in that expectation, because the presence of the trace minerals makes all the difference.

Why are trace minerals important?

It is commonly believed that life began in the primordial ooze – most likely the sea or mineral-rich clay – by the interaction of gasses in the air with minerals in the ooze, and fueled by energy from the sun or a deep sea vent. This resulted in a cell whose main fluid component contained the minerals from the ooze; this same composition is reflected in our body fluids such as blood and plasma. When we consume salt that does not have the same balance of minerals as sea salt, we upset the balance in our cells and body fluids, by a lack of synergy. If this happens consistently over time, disease can result. Replacing table salt with unrefined sea salt can restore balance.

For all these reasons, I recommend using unrefined sea salt, not table salt, for cooking and seasoning at the table.

If your doctor has advised cutting down or totally eliminating salt from your diet, your doctor is referring to table salt. Try using unrefined sea salt for a few weeks and regularly check your blood pressure. I’ll bet you’ll find that the sea salt consumption has not increased your blood pressure, and it may, in fact, have helped to reduce it.

One of the most important trace minerals in unrefined sea salt is magnesium. In the body, it helps muscles to relax, which is why it helps people who have trouble going to sleep or stay asleep. In my case, lack of sufficient dietary magnesium led to what appeared to be a heart attack. My attack resulted from spasms of the muscles lining the arteries in my heart; the spasms temporarily blocked the flow of oxygen, which my heart interpreted incorrectly as a blockage and went into heart attack mode.

Dr. Wilson (6) points out that magnesium has a balancing effect on sodium, and it can also help to lower blood pressure when sodium has raised it. This is one of the main reasons why switching from table salt to unrefined sea salt can lower your blood pressure.

Insufficient magnesium in the diet may also manifest as constipation. If your body senses not enough minerals are absorbed by the time the chyme (digesting food mixture) reaches the large intestine, it slows down the movement through the bowel. More fluid is absorbed, drying out the stool, which slows down movement even more, resulting in constipation. Adding supplemental magnesium as mag citrate or mag chloride can reverse the problem and get your stool moving again. This is why Milk of Magnesia (magnesium hydroxide) works to resolve constipation.

To learn more about the digestion process, see an excellent article on the International Foundation for Functional Gastrointestinal Disorders (IFFGD), Your Digestive System and How it Works (8).

Another important mineral in unrefined sea salt (but not in table salt) is potassium, primarily as potassium chloride salt (KCl). It is very important for heart health, relaxation of muscles, and bone health. It can lower your risk of high blood pressure, stroke, and heart disease, and also osteoporosis.(9a)

Many cardiologists recommend their patients switch from table salt to potassium chloride, to increase their potassium levels. However, supplemental potassium chloride is also a highly processed salt; in my opinion, switching to unrefined sea salt is a better option. Also increase the consumption of high-potassium foods such as lima beans, winter squash, cooked spinach (and other green leafy vegetables), and avocado. Mercola (9a) recommends juicing green leafy vegetables as well (kale, broccoli, chard, beet greens, collards, etc.). Certain fruits are also high in potassium, including papayas*, prunes, cantaloupe, and bananas (9a). *Note that commercially grown papaya may be GMO.

It is generally recommended to consume five times more potassium than sodium, but most Americans get two times more sodium than potassium. (9a)

Symptoms of low potassium include weakness, lack of energy, muscle cramps, stomach disturbances, an irregular heartbeat, and an abnormal EKG. (9a)

Iodine is added to table salt to prevent iodine deficiency and goiter. Iodine is critical for proper functioning of the thyroid gland, and a lack of iodine in the diet leads to many problems, the most visible of which is goiter. Iodine deficiency comes about when people do not eat seaweed or sufficient wild fish and shellfish from our oceans.

Unrefined sea salt does not provide iodine. Therefore, I recommend regularly consuming some variety of kelp or seaweed, or using a supplement made from kelp or seaweed, to add iodine to your diet. A supplement I use is Bernard Jensen’s Liqui-Dulse (see Amazon for more info).

Although most table salt starts out as mined rock salt, its similarity to unrefined sea salt ends there; table salt is highly processed:

In older times, the salt was simply mined, dried and filtered.  The resultant product contained all the minerals present in sea water, many of which are present only in trace amounts, and all of which are essential to life.  In fact, the concentration of various minerals in natural sea salt correlates very closely to the amounts of each mineral required for health, a very happy circumstance indeed!  This is what made it so valuable.

Don’t be fooled, however, by many brands of so-called “sea salt.”  These salts are indeed made from real sea salt, but then are processed much as common table salt, to isolate the sodium chloride, and thus do not contain all the other beneficial minerals found in un-processed sea salt.

The only advantage of this salt over table salt, is that it is not treated with anti-caking ingredients which includes aluminum. You can easily spot these salts because they are as white as common table salt. But you should also read the label for salt content, as some true sea salts are pure white.

More correctly called ‘Koshering Salt,” this is a coarse-grained salt used for koshering meats to make them kosher, by draining them of blood. Kosher salt has been processed similarly to table salt to remove most of the trace minerals, but it does not include additives.

Because it is coarse-grained, if you use it as a substitute for table salt in recipes, you must increase the amount, and then give more time for it to dissolve before tasting.

I use Kosher salt for brining meats, to help them retain moisture when cooked. This is especially helpful for chicken and turkey breasts.

For more, see reference 1b, below.

For true sea salt, look for salts with a bit of pink, grey or marine-green color to them (although some are pure white). These salts have been minimally processed, and retain the full spectrum of minerals found in sea salt-  hence the colors. However, be careful to choose brands made from sources free of toxic minerals such as mercury.  Of course, these salts are more expensive than table salt, but isn’t your health worth it?  Most are also more coarse than table salt, so you must increase the amount if you use it as a substitute for table salt in recipes.

Some brands or types of unprocessed sea salt 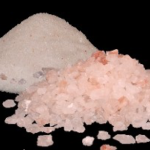 French fleur de sel is collected off the coast of Brittany, and is slightly grey due to the sandy minerals collected in the process of harvesting the salt from the pans.  Portuguese flor de sal is hand-harvested from the Algarve region of Portugal, is pure white, and usually sells for half the price of the French fleur de sel. (1a)

Most Natural Foods and Health Foods stores carry unprocessed sea salts.  Here are a few web sites from which you can purchase unprocessed sea salts.  Such stores in my area sell Celtic Sea Salt and Real Salt brands; a local kitchen store sells many different kinds of unrefined sea salt, many of which are flavored with herbs. Recently (2021), our local grocery store now carries Real Salt.

‘Salt cellar’ is the common name for boxes and jars used for storing the coarse-grained unprocessed sea salts.  NapaStyle.com has an attractive assortment of salt cellars.  Also check out antique stores, as they often have very beautiful wall-mount cellars with wooden lids.  And many of the salt sources listed above sell their salt in reusable salt cellars.

Online sources for different types of sea salts from around the world:

See my 'About' page
View all posts by Cat →
This entry was posted in Flavoring, Health and tagged salt. Bookmark the permalink.