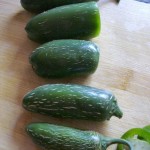 Ever since I first discovered it in Anna Thomas’s Vegetarian Epicure Book II (1), Spinach Enchiladas Suizas has been a favorite. Sometimes I add chicken to the filling, but usually I make it vegetarian, and serve it with black beans, corn bread and a big salad.

I did not grow up knowing about chiles; I discovered them after moving to Portland Oregon after graduate school, when I found the small Mexican food cafes were inexpensive and surprisingly delicious.

This recipe, adapted from the Vegetarian Epicure II, by Anna Thomas (1), serves 5-6.  If you can find it, you could use Manchego or other mild Mexican cheese instead of Swiss cheese.  My favorite Swiss cheese is Emmanthaler.

You could use swiss or red chard instead of spinach.