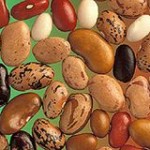 I’ve always liked this salad ever since I had it in the lunchroom at Bigfork Schools where I grew up, but I had never made it. So this year I signed up for a -day juice fast at the Wellness Education Center in Kalispell, MT. For at least a week after the fast, you slowly re-introduce solid foods, beginning with raw fruit, then raw or sprouted vegetables, and so on. I decided to make a bean salad using sprouted beans to eat as a protein source until I could add meat to my diet again.

I didn’t have to look far for a good recipe – my newish copy of Nourishing Traditions, by Sally Fallon, with Mary G. Enig, PhD.. You have to start this at least 3 days in advance of when you want to eat the salad, because it takes time for the dried beans to sprout. But it’s well worth the wait.

This recipe is adapted from Nourishing Traditions, by Sally Fallon with Mar G. Enig, PhD. (1), with ideas from Elise.com (2). To make it 5-bean, add two of the following: lima beans, black beans, navy beans, pinto beans, appaloosa beans, or fresh green beans. Or add four of those choices to make it 7-bean…

I don’t advise using the raw sprouted beans in the salad – some varieties of raw sprouted beans are OK for a snack, but not for a meal. After sprouting, I lightly steam the beans so they are not overcooked (to preserve as much of the vital nutrients as possible).

Serves 4 to 8. See below for testing.

NOTE: if you wish to use fresh green beans, they do not need the soaking/sprouting. Simply add them during the last few minutes of cooking/steaming.

Jan 5, 2010: I sprouted cannellini, kidney, appaloosa, and garbanzo beans for 3 days, then steamed them for about 25 minutes until done but not soft. (I forgot about boiling kidney beans for 10 minutes – OOPS). Then followed the recipe as written. I had about 3 cups beans (after sprouting), so could have used a bit more dressing. Otherwise, delicious! Next time if I include kidney beans, I’ll do the boiling thing; perhaps sprout them separately so I can boil just them; then steam with the other beans.

Jan 4, 2011: As before I sprouted my beans first (cannellini, kidney, appaloose and garbanzo). Most of the cannellini, which were from my 2009 garden, did not sprout after 4 days, but all the others had nice tails. This time I got 2 cups of beans, which is perfect. OOPS, forgot – again – about boiling the cannellini and kidney beans. Steamed about 25 minutes as before. Wonderful taste with the dressing, after marinating for a day.

Jan 12, 2012: As before, sprouted my beans (cannellini, navy, anasazi and kidney) over 3 days to ½” long tails on some; but the navy didn’t sprout – probably too old. Still, they got a good soak. Got almost 2 cups beans. I remembered to boil the cannellini and kidney beans. Then steamed all about 25 minutes. As always, this tasted great!