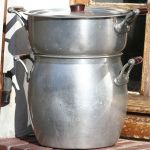 Couscous is a type of fine-grained pasta, typically made from semolina flour (wheat), and is common in Moroccan cuisine. Orzo, from Greece, is similar but not quite as fine-grained.

Originally, freshly made couscous (from semolina and water, then dried) was steamed in a pot set above a stew or tagine while it is simmering. The lid of the pot has small holes around the edges to allow steam to escape. But now you can buy pre-steamed and dried couscous that takes only a few minutes of steaming.

If you need to avoid gluten, sprouted & steamed quinoa is a reasonable substitute (see Saffron-Raisin Quinoa). 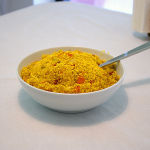 These instructions are for couscous that has been pre-steamed, then dried, before packaging. The following is from CookThink (1). Middle Eastern Food, About (2) also provides instructions, but cites more water than is needed.

See my 'About' page
View all posts by Cat →
This entry was posted in Equipment, Grain, Steamed and tagged couscous, semolina. Bookmark the permalink.