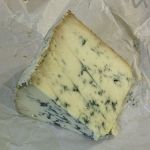 In the 1970s while living in Portland, I met a couple who had moved there from London and opened a Jewish Deli. Over the years, I was invited many times to their home for a buffet dinner where dessert was almost always stilton cheese with sliced apples and/or pears. I learned to love that combination.

It is hard to find Stilton here in rural Montana, so when I go to Portland, OR for a visit, I go to City Market and stock up.

This is my own recipe but inspired by an Apple/Bacon/Blue Cheese Quiche once offered by the Swan River Cafe here in Bigfork.

If you’re not familiar with Stilton, The English call it the King of Cheese. Its base is pale yellow, with blue veins like a French Blu. It has a strong flavor that may take some getting used to, if you are not already a fan of blue cheese. Often served as a first course with slices of apples or other fruit, it can also be served as a dessert course, and it goes well with any wine.

Did you know that the blue veins in any blue cheese are a penicillium mold (the fungi from which the original penicillin antibiotic was derived)? This same mold is used in sausage-making to protect the curing meat from being infected by bad bacteria.

When Stilton is not available, you can use any blue cheese, or a mix of blue and a yellow cheese. Kerrygold (from Ireland) has a good Irish yellow cheese that mixes well with Danish Blue. Another option is Huntsman cheese which is layers of stilton separated by layers of Double Gloucester (a rich yellow cheese without the blue), and thus reduces the ‘blue’ flavor.  Check out Using Stilton (1) for more info and ideas for stilton.

You can substitute shallots or scallions for the leek, but it will have a different flavor. If you can’t find unsmoked bacon, look for one that does not have added smoke flavor. it’s also a good idea to blanch it to remove the smokey flavor: