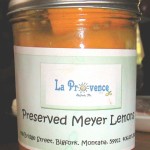 The summer of 2010, several local businesses in my local Montana community of Bigfork MT decided to have a public market in the village every Wednesday, featuring crafts and foods grown/made in our valley. One of those businesses was LaProvence, a wonderful French restaurant here, and sold vegetables from their farm, and items prepared in the restaurant, such as the jars of Preserved Meyer Lemons pictured right.

I bought a jar, curious about what it would taste like, and then looked up several recipes on the internet to get an idea of how to use this fermented food. This is the first recipe I tried, and discovered I love preserved lemons in recipes, and learned how to make (ferment) them myself.

NOTE: LaProvence is no longer in business, a victim of the great recession. The owners now manage a hotel restaurant in Little Rock, Arkansas.

This recipe is adapted from Helen Rennie’s recipe website: Swordfish with Moroccan Spices & Preserved Lemon (1), and serves 4. Swordfish is highly contaminated with mercury and other toxins, so should be avoided, or at least eaten rarely. But this recipe is so good that I think it would also be great using lamb or chicken. Another idea is to do a ‘mixed grill’ using a bit of chicken, lamb and swordfish.

Serve with couscous, as in the similar recipe from Food.com, Moroccan Chicken with Preserved Lemons (2).

If using swordfish, remove skin; keep the skin-on for chicken. If you want a head-start, prepare the meat through searing (step 4); then allow seared meat to cool,  cover and store in refrigerator until ready to make the sauce.

I’ve only tested this recipe with swordfish.

7/2/11: I bought some swordfish and wanted to marinate it in lime juice/olive oil, with some spices, but wasn’t sure what spices I wanted to use. And then I remembered this recipe. I followed, as written (cutting amounts in half because only 1/2 lb fish), except: used garam masala instead of individual spices, and eliminated the sauce. I just grilled the marinated fish. I forgot to record how it turned out, but if memory serves me well as I transfer this recipe to my new blog in 2015, it must have been delicious because I added the recipe to my old site.