If you want to reap all the health benefits of coconut and coconut milk, I highly recommend starting with a raw coconut. I admit, the first time it’s a bit of a challenge to open one and remove its peel, but after that first time, it gets easier. Also, you might start with a young coconut, as they are easier to open.

Canned coconut milk can be used in a pinch, but remember that toxins from the BPA liner can bleed into the contents. I do not recommend lite coconut, as it has lost much of its nutritional value present in the rich coconut oils. 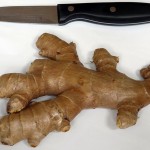 This recipe is adapted from a can of Thai Kitchen brand coconut milk (1), and serves 3-4 people.

The original recipe calls for 2 Tbsp Thai Kitichen Tom Yum Hot & Sour sauce mix, but that contains ingredients I wish to avoid (such as MSG).  The main flavorings in this mix are lemon grass, tamarind (a date-like fruit used in Worcestershire sauce), lime, galangal (a rhizome with a citrus-piney flavor, that can be purchased at Asian markets in powdered form) and chili.  As alternative to this mix, I use minced garlic, worcestershire sauce and rice vinegar, in addition to lemongrass and lime juice already listed in the recipe.  If you can find the powdered galangal, add it to taste, about 1/4 tsp.

Fish sauce is a common salty seasoning in SE Asian recipes. Straight out of the bottle it is a bit disgusting, but it works magic in the recipe, and adds many health benefits of fermented foods. You could substitute tamari sauce (fermented soya sauce), but it won’t have the same flavor.