The Problems with Commercial & Ultra-Pasteurized Milk 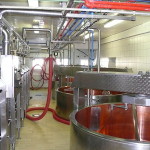 Close your eyes and imagine a dairy farm. Do you see a cheerful red or white barn surrounded by rolling hills of green, grassy pasture, with cows contentedly chewing their cud?  Well, that’s what dairy farms were like in days gone by, and what they may become again.  But today, most commercial dairies are nothing like this. And their milk is nothing like it was in the 1950s when I was growing up.

Today, the modern commercial dairy cow is a holstein bred to be a milk-producing machine. She is likely confined to a barn rather than allowed to graze in pasture. 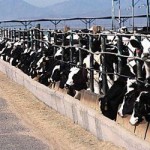 Do you think that buying “Organic” milk spares the cows of this indignity?  Not necessarily.  Many organic dairies simply feed their cows with special feed from organically-raised grains, and do not treat the cows with added growth hormone and antibiotics.  However, their own pituitaries are bred to produce high levels of growth hormone.  And they are often confined to their stalls, to keep them upright.

Of course, not all commercial dairies are like this. And some dairies mix milk from pasture-fed cows with that from confined, grain-fed cows.

You can still find small, local dairies who raise older lines of Holsteins, and Holstein crosses, as well as Jerseys, Guernseys, Red Devons, and even goats.  These dairies do allow their animals to graze on green pasture, especially from spring into fall, and then feed them green feed, silage, and root vegetables in the winter, just like in older times.  Examples of these humane dairies may be found in your own communities, if you take the time to investigate.  Tillamook and Organic Valley are commercial dairies whose cows are mostly pasture fed, but their milk is still pasteurized (2).

In western Montana where I live, pasteurization is required, but we still have some small local dairies:

In most commercial dairies, cows are kept in tight-quarter confinement, and never see a real pasture.  They are fed a diet mainly of soy and corn (or other grains). This is NOT the natural diet of cows whose ruminant stomach is designed to ferment grass; consequently the cows are not as healthy as they should be, and live a much shorter life than their pasture-fed counterpart. Their milk is far inferior, and the butterfat has an unbalanced ratio of Omega-6:Omega-3 fats. Confinement-fed cows have milk with lower levels of important nutrients than pasture-fed cows:

The heat of normal pasteurization is not sufficient to kill certain heat-resistant bacteria, such as that which causes Johne’s disease (with which most confinement dairy cows are infected).  This is the same bacteria that is suspected of causing Crohn’s disease in humans.  In order to destroy the heat-resistant bacteria and give milk a longer shelf life, the process of ultra-pasteurization has been introduced.

This is a violent process that takes milk from a chilled temperature to above the boiling point in less than 2 seconds.  This process is even more harmful to the milk at a molecular level than normal pasteurization (2).

Another consequence of this milk is that most people have developed an allergy to it. This is because of the denaturation of both the casein and whey fractions in the milk. See Why Pasteurize Milk? and scroll down to the section on Denatured Proteins: Birth of an Allergy  for more on this problem.

Another thing we all learned in school is that oil and water don’t mix.  And that is also true of the butterfat and watery components of milk. When fresh cow’s milk is allowed to rest, the butterfat, or cream, rises to the top. One must give it a really good shake to disperse the fat globules back into the watery milk, each time you want a cool refreshing glass. NOTE: goats milk takes longer for the cream to rise to the top, than it does for cow’s milk, because the goat milk fat globules are much much smaller than in cows milk.

So the process of homogenization was invented.  In this process, the milk is forced at high pressure through a very small orifice, breaking up the fat globules into smaller, denser particles that will remain suspended in the watery fluid, similar to goat milk.

Homogenization of milk continues to be controversial. Some scientists believe it may be linked to heart disease (2d); others have debunked this theory (10). It is also suspected that the process causes milk allergy because the fat globule configuration is not natural.

Just how is low fat or skim milk produced?  Learning this answer was an eye-opening experience for me. I was working in an office across the street from a dairy processing plant.  Every day at lunch, I’d watch the big milk-tank trucks pull up and drain their white liquid into large vats inside the plant.  I was curious about what happened next, so one day, I asked for a tour.

Gleaming stainless steel, copper, and glass everywhere.  I was shown how the milk is heated (pasteurized), and then separated into its various components, most of which were then purified and dried (think nonfat dried milk).  Much of the casein (one of the milk proteins) was sold off for other uses, such as white glue and casein paint.

This is definitely not your great-grandmother’s farm milk!  And it is not good for you.

Only milk labeled “whole milk” was saved from the separation and drying process, but it is still treated to pasteurization, homogenization and vitamin fortification.  Only “cream at the top” milk has not been homogenized.  And only “raw milk” has not been pasteurized.