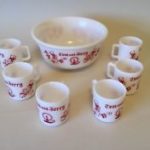 During the 1950s and early 1960s, my parents owned Al’s Bar in downtown Bigfork, Montana. There were three bars in our tiny village, and at Christmas, all served a popular beverage to celebrate the Christmas holiday: Tom and Jerry. But each bar’s recipe was a bit different. Ours was the only bar that used a traditional serving set that included a beautiful big white glass bowl and matching mugs that said “Tom and Jerry” in Christmas-red color on the sides (similar to those in the photo, right).

Each customer got his/her first mug-full for free each year. Dad was quite proud of the liquor mix recipe he created, and Mom was equally proud of her batter that she had to mix up several times each day throughout the month of December. And I got to lick the beaters.

For an interesting video about a bar in Great Falls Montana that still serves Tom and Jerrys, check out KBZK’s video (1). 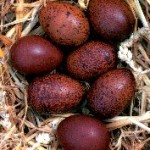 I should note that we got our eggs from a local farmer who allowed his hens free range on his property so that their yolks were a beautiful orange-yellow color. His wife did a great job of washing the eggs before putting them into cartons, so we didn’t have to worry about contamination when consuming the raw, beaten eggs in this sweet beverage.

The beaten eggs were mixed with a liquor mix and hot water when served to adult customers; but when served to children like me, the liquor was replaced with root beer.

Some modern recipes call for vanilla extract. If you want that vanilla flavor, instead cut 1 – 2 vanilla beans in half lengthwise. Transfer the box of sugar to a large jar; immerse vanilla beans in the sugar and screw on jar’s lid tightly. Let rest for 1 – 2 weeks before using for this batter. See Alton Brown’s recipe (2) for more information.

This was my Dad’s liquor recipe, and Mom’s batter recipe (but I don’t know her source).

CAUTION: Use only eggs from locally raised, free-range hens, and ensure the shells have been washed well, as you will be using these eggs raw. You don’t want to get salmonella infection during the holidays!

Prepare in 5th-size bottle as follows: