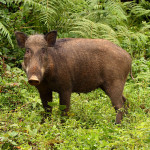 A few years ago I learned I had a food sensitivity to all things cow, pig and sheep.  I was heartbroken, because I’m an avid meat eater.  So I sought out sources of wild game, such as wild boar, buffalo, venison, elk.  And then I had to learn how to cook with these meats.  (2014 update: that sensitivity has been cleared by a local NAET practitioner).

The first recipe I tried was from a cookbook entitled Wonderful, Wonderful Danish Cooking by Ingeborg Dahl Jensen, published in 1965.  I had originally stumbled across this book in a dusty old used book store in the skid road part of Portland in 1971, when I had first moved there.  I picked it up because, first of all, I have a Danish heritage, and second, because the author’s first name was Ingeborg, the name of one of my great aunts, and I’d never seen that name in print before.  It has since become one of my most Beloved Cookbooks.

Anyway, in this cookbook is a recipe titled “Old Recipe for Danish Stew (Stuvet Oksekød),” that resembles German Sauerbraten, and is made from beef or venison.  I tried it with some buffalo stew meat, and I was hooked.

Then I adapted the buffalo recipe to use wild boar, which is like a cross between pork and beef in flavor and color of the meat. And I used some stale beer for the soaking of the meat instead of cider vinegar.

If you cannot find wild boar, perhaps someone in your community raises a heritage breed of hog (not the hairless pink pigs), as their meat is similar to boar. In a pinch you could use pork, but it won’t have the same flavor and texture as boar.

This recipe does not contain potatoes or other stew veggies; instead, these are served on the side.

Wild boar is similar to pork, but also somewhat resembles beef.  I’ve never tried this with pork, so don’t know how it would turn out, but the wild boar is quite delicious.

A key to success with this recipe is: always use low/simmer heat; don’t sear the meat.