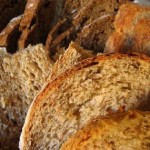 By Cat, Nov 2007 (Photo, right, from University of Maryland)

I got my first copy of Edward Espe Brown’s Tassajara Breadbook in the early 1970s.  It was considered a must-have for all hip alternative people, and for many of us, was our first introduction to baking in a healthful way.  For me, it has been my bread bible ever since.

One of the things I learned early from this book, is the importance of creating a bread sponge, with only part of the flour added, and then left to rest before adding the remainder of the flour.  This accomplishes three things:

Of course, there are other ways to break down the phytates and predigest the carbs and proteins:

My Dad’s bread recipe, adapted from a 1940s Occident Family Flour cookbook (Home Baking Made Easy, by Virginia Roberts), used similar technique, and produced a wonderful half whole wheat-half white loaf. Dad never knew about using a sponge, but if he had, I’m sure he would have used it, especially for his whole-wheat bread.

The basic sponge method allows the sponge to rest 60 -75 minutes in a warm spot, before adding salt and remaining flour. But I’d like to incorporate a longer, acidic pre-soak of the flour in the sponge step, to further improve the bio-availability of the nutrients and break down the anti-nutrients, which I highlight next.

My first idea was to use yogurt/buttermilk instead of milk in the sponge, because the lactic acid in the yogurt would promote deactivation of the troublesome phytates, and partially predigest the starches for easier digestion and assimilation.  But a long overnight soak with active yogurt and yeast resulted in insufficient rise, probably because the lactic bacteria in the yogurt out-competed with the yeast for available sugars.

My second idea was to presoak the flour with de-activated yogurt overnight, and then add yeast to make the sponge after the overnight soak.  (The yogurt is deactivated with boiling water). This made for a very light loaf, but it had a sour taste I didn’t like.  I believe this was due to acids formed during the multiple rises.

So my third idea was to add a bit of baking soda to the dough after the presoak, to neutralize the lactic acid from the yogurt, after it has worked on the phytates in the presoak.  I have not yet tested this idea with this recipe, but I did try it with sourdough when it got too sour, and it does work.

A fourth idea is to incorporate the overnight, cool rest, but without the acidic medium, in the hope that the long rest would accomplish the task with the acids produced by the yeast and native lacto-bacteria in the pre-ferment (poolish). My ciabatta or Whole Wheat & Oat Yeasted Bread are examples of this, but I’ve not pursued this further, once I got interested in sourdough. The following recipes all use a portion of the yeast for the overnight sponge, then add the remaining yeast the next day, to replenish the now-spent original yeast.

Meanwhile, I decided to try something different, to avoid the pre-soak.  In this case, regular whole grain flour is used for the sponge; then sprouted whole grain flour is added in part 2.  The hope is that the enzymes from the sprouted flour will help break down the phytates and predigest the starches in the regular flour during the rise in part 2.

This did produce a good bread, but now my source of sprouted flour is no longer available, so it’s back to perfecting the whole grain sponge recipe.  The Whole Wheat and Bulgur Bread recipe (7)  also shows promise (external website).

This recipe (which I’m still perfecting), adds an overnight presoak to the Basic Yeast-Risen Bread; thus it is made in three stages, separating the pre-soak from the yeasted sponge:

This recipe is adapted from the original Tassajara Yeast Bread recipe (refer to Sponge Method for Yeast Bread Intro for more on this) and Dad’s Occidental Family Flour Whole Wheat Bread recipe (2).  I replaced part of the water and the milk with active yogurt, to provide an acidic medium for breaking down the phytates.

It’s best to use wheat or spelt for the sponge, but you can then use other grains in part 2, if you desire.  For example, kamut, rye, rolled oats or oat flour, cornmeal, millet, or barley. My preference in flour for the sponge, and for kneading, is Wheat Montana Prairie Gold (Hard white grain) flour (9).

Ingredients & Method for Half Recipe (1 loaf)

As I tested the recipe, I found I needed to revised the amounts of some ingredients. The final amount is given first; the previous amounts, crossed out, are shown in parenthesis at the end of the line.

Bake 50-60 minutes.  Cool on rack; may brush with melted butter while still warm.

11/19/07:  I used homemade unsweetened yogurt to acidify the sponge, and Wheat Montana Prairie Gold flour (hard flour) for all the flour/grain.  I added 2 Tbsp of gluten to the flour in the sponge.  The sponge worked nicely overnight.  I added only 1 cup additional flour in part 2 (instead of 1 ½ cups), and the dough was nicely elastic.  The two risings in the bowl were slow; taking about 2 hours each time, to double in bulk, but the dough felt quite lively, so I know the yeast had not failed.  Once in the pans, it did not rise to double bulk, even after 2 hours, so I decided to bake it as is, barely to the top of the pans. Baked at 375°F for 50 minutes.  Result:  A bit dry, tasted salt.  Next time: Cut salt to 1 tsp, and increase water to ⅔  cup(or decrease flour).

12/8/07:  Mixed only yogurt and flour for overnight pre-soak; next day made sponge with only 45 min rise. No changes for remainder of recipe. Sponge was wonderfully light and oddly bubbly, but I let is rise too long (90 min).  After adding the remaining flour, dough was very elastic and alive, but again I let is rise too long (2 hours), which introduced the alcohol.  Shaped 2 loaves did not rise well, same as last time.  Oops! Forgot I was only making 1 loaf, not 2!  which were then too small for the big pans. Result:  VERY SOUR and alcoholic.  Next: try ⅓ cup yogurt, ⅔ cup milk per loaf for pre-soak, plus 2 Tbsp gluten. Set bowl on rack on stove near pilot lite, & strictly monitor rise. Proof ¾ Tbsp yeast (to minimize beery taste) in ⅓ cup warm water. Use 2 tsp salt per loaf. Form only 1 loaf.  Based on Naan research, I think I should mix yogurt with boiling water or hot, scalded milk, then allow it to cool to lukewarm before adding to sponge.  This is to deactivate the organisms in the yogurt that would compete with the yeast, while retaining the lactic acid in the yogurt for soaking the flour.

12/14/07:  Decided to test sprouted grain recipe below.  Success with this!  However, try again using boiling water or scaled milk mixed with yogurt, instead of allowing scalded milk to cool.

3/10/08:  I’ve gotten more experience with whole wheat breads, by working on my flatbread recipes, and concluded I’ve used too little moisture/too much flour in my loaf bread.  I altered single-loaf recipe as shown in blue for this test, which includes adding boiling water to the yogurt.  In Part 3, I reduced from 1 to  1/2 cup white flour with the salt and butter; allowed it to rise twice before shaping into loaf, then rose again before baking, per the recipe.

Dough has wonderful light texture throughout the process, with no beery smell; however, in step 2 (after overnight rest), it was very difficult to work in the proofed yeast and gluten; my muscle-powered heavy wooden spoon had no effect.  I used my stand mixer fitted with the dough hook. The shaped loaf is fairly soft and spongy, but holds its shape.  Result:  Great texture; nice crumb and lightness. But it has acidic taste (lactic acid?).  Next Time:  Try adding ½ tsp baking soda in part 2.